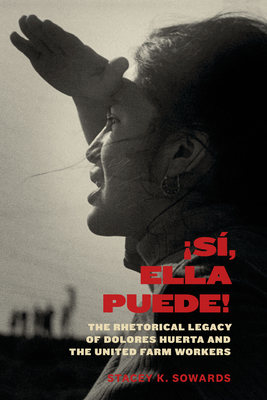 Since the 1950s, Latina activist Dolores Huerta has been a fervent leader and organizer in the struggle for farmworkers’ rights within the Latina/o community. A cofounder of the United Farm Workers union in the 1960s alongside César Chávez, Huerta was a union vice president for nearly four decades before starting her own foundation in the early 2000s. She continues to act as a dynamic speaker, passionate lobbyist, and dedicated figure for social and political change, but her crucial contributions and commanding presence have often been overshadowed by those of Chávez and other leaders in the Chicana/o movement. In this new study, Stacey K. Sowards closely examines Huerta’s rhetorical skills both in and out of the public eye and defines Huerta’s vital place within Chicana/o history.

Stacey K. Sowards is a professor and chair of the Department of Communication at the University of Texas at El Paso. She has published several articles and other works on Dolores Huerta and the United Farm Workers, as well as on immigration activism in the twenty-first century.

[Sí, Ella Puede!] opens an important conversation about Dolores Huerta as a major figure of twentieth-century civil rights organizing…Sowards's integration of Chicana and Latina feminist theories, emphasis on agency in the context of social movements, and incorporation of archival materials invites historians, sociologists, feminist studies scholars, and Latinx studies scholars to consider new frameworks that increase the visibility of the social movement activism of women of color.
— Journal of Arizona History

¡Si, Ella Puede! foregrounds the rich, complex, and often contradictory narratives by and about Huerta’s 60-year legacy of activism. From a rhetorical perspective using oral history interviews, witness accounts, secondary sources along with a collection of selected archival material, Sowards makes the case for including Huerta’s corpus of speeches, letters, and testimonies related to her grassroots mobilizing efforts on behalf of the United Farm Workers Union (UFW) in the canon of Chicana political rhetoric and post-World War II U.S. civil rights history.
— Quarterly Journal of Speech

Shifting the focus from male leadership in historical and rhetorical scholarship about the UFW and the Chicano/a movement, Sowards instead centers the role of women and their activism. To achieve this, the book relies on impressive archival research, ethnography, and interviews...Sowards’s timely book brings to the forefront how women activists have strategically used their varied identities to shape and deploy their rhetorical agency, gain power, and advance social justice causes. Sowards’s study is likely to inspire future studies in Chicana/Latina rhetorics, potentially bringing attention to obfuscated figures such as Helen Chávez, Hope López, and Jessica Govea.
— Signs: Journal of Women in Culture and Society

[¡Sí, Ella Puede!] provides a holistic analysis of the structural and intersectional factors that shaped her agential tactics and enabled Huerta to inspire her audiences. The text is a valuable read for students and educators of rhetorical discourse and those interested in marginal forms of oratorical expression...¡Sí, Ella Puede! is a powerful rhetorical tool and a necessary call for the continued examination of past and present marginalized rhetorics.
— Women's Studies in Communication

¡Sí, Ella Puede! offers an important intervention and a refreshing, intimate reassessment of Huerta...Sowards offers a compelling look at the evolution of an activist and leader. Huerta’s life and language are front and center, demonstrating why and how she played such a significant role in the UFW and, further, how women at the margins of dominant society can exercise rhetorical agency. As such, historians of the UFW will find this study of much interest, as will scholars of social movements...¡Sí, Ella Puede! is a rigorous and engaging exploration of the life, rhetoric, and legacy of a remarkable figure.
— Pacific Historical Review

¡Sí, Ella Puede! is an important addition to recent scholarship on the United Farm Workers union (UFW) and the farmworker social movement...this is a valuable work that advances our understanding of the political and personal struggles of women in the construction of the UFW and the contemporary farmworker movement. !Sí, Ella Puede! is a welcome addition to the new body of scholarship on this historic movement, which will be useful to students and scholars in the fields of Chicana/o studies, US ethnic studies, US gender studies, and US labor studies.
— Aztlán: A Journal of Chicano Studies

This feature require that you enable JavaScript in your browser.
END_OF_DOCUMENT_TOKEN_TO_BE_REPLACED

END_OF_DOCUMENT_TOKEN_TO_BE_REPLACED

This feature require that you enable JavaScript in your browser.
END_OF_DOCUMENT_TOKEN_TO_BE_REPLACED