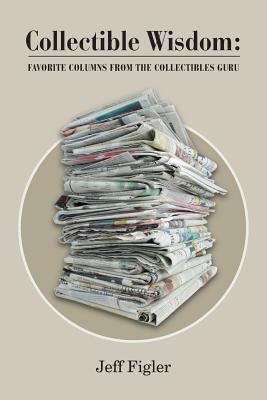 By Jeff Figler
$15.99
Not in-stock currently- expect arrival in 1-14 business days
(This book cannot be returned.)

Collectible Wisdom, by Jeff Figler is a compilation of 130 of Jeffs' favorite and most popular columns on collecting. In Collectible Wisdom, Figler, the "Collectibles Guru" has included columns on a variety of pertinent collecting topics, including how to get started, budgeting, how to find items, as well as insuring and displaying items. There are columns on popular collecting categories, such as sports memorabilia, comics, dolls, figurines, books, Bibles, movie memorabilia, presidential and historical relics, pop music, records, coins, stamps, magazines, board games, and MANY others. Jeff also has included such diverse columns such as how to collect autographs, and how to avoid frauds. Jeff Figler, the "Collectibles Guru" is a former columnist for the St. Louis Post- Dispatch\ STL Today, the San Diego Union-Tribune, and the Pomerado Newspaper Group. His columns appear regularly in The Journal of Antiques and Collectibles, Collectors Journal, Sports Collectors Digest, and other magazines in the collectibles field. He is a popular speaker on cruise ships, and Jeffs' radio shows have been heard in countries around the world. Collectible Wisdom is a useful tool for the beginner, as well as the advanced collector, as well as for those who simply want to know more about collecting. This compilation of columns by one of the world's experts on collectibles is a must-read.

A nationally-recognized expert on collectibles, Jeff Figler has authored over 400 published articles about sports, pop culture and historical/presidential collecting. He is a former sports columnist for the St. Louis Post Dispatch, STL Today. In addition, his articles appear regularly in The Journal of Antiques and Collectibles, Collectors Journal, The Antique Shoppe and Today Vintage, and other magazines in the collectibles field. He has been the Collectibles Editor for Hall of Fame Media and has been a syndicated radio talk show host through Sports Byline, heard by millions of people in 173 countries on the American Forces Network. He is also a popular speaker on Royal Caribbean cruise ships. Figler's personal collection is a true testament to practicing what you preach. Jeff and his wife established the Figler Foundation and Museum in 2006. The Museum has been featured by major media across the United States. Included in the Museum's sports, historical/presidential, and pop culture galleries is a Honus Wagner baseball card (considered the "Holy Grail" of sports cards), as well as Beatles and Superman memorabilia, and a handwritten letter by every U.S. president. Jeff and his wife reside in St. Louis, San Diego, and London. He can be reached at jfigler@jefffigler.com

This feature require that you enable JavaScript in your browser.
END_OF_DOCUMENT_TOKEN_TO_BE_REPLACED

END_OF_DOCUMENT_TOKEN_TO_BE_REPLACED

This feature require that you enable JavaScript in your browser.
END_OF_DOCUMENT_TOKEN_TO_BE_REPLACED