Great Ideas For Grandparents: How to have fun with your grandchildren and promote positive family relationships (Paperback) 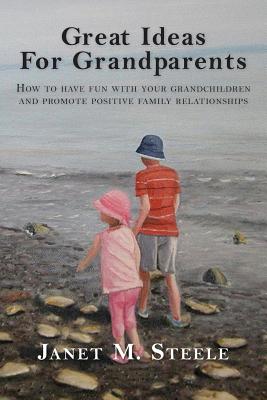 'Great Ideas For Grandparents' (How To Have Fun With Your Grandchildren And Promote Positive Family Relationships) captures the fun and crazy things this author has done with her grandchildren; as well as the lessons learned along the way in preserving and promoting good family relationships. Her Top Ten List For Being A Good Grandparent includes 'must-do' and 'never-do' rules. Most of all, the book gets right down to the 'fun-stuff-to-do' to entertain and keep them busy. It is a good read for all grandparents; an interesting read for anyone; and a great gift idea for grandparents-to-be.

Janet Steele has always loved interacting with children and watching them at play. Janet gets her inspiration for writing from the experience of raising two sons and being a special pal to four grandchildren. Her passion for writing has always been there, but only after retirement from public service in 2007 has she had the time and energy to pursue it. Besides being an author, Janet is also a fitness instructor and amateur golf enthusiast. She resides in the Annapolis Valley of Nova Scotia with her husband John. In addition to "Great Ideas For Grandparents" Janet has published her first children's book called "Imagine That! What If you Had An Imaginary Friend Too". Targeting the 3-6 year-old age group, the story is based on a young boy's interactions with his imaginary friend. The idea for "Imagine That" came from observing one of her own sons with his imaginary friend. Janet has already begun writing a new children's book entitled "All She Wants Is A Ponytail", which will be published in the near future. Janet's books are available through Amazon, both as a print on demand book as well as a kindle e-book. "Imagine That" is also available through Apple iBooks as an e-book. You can follow Janet's ongoing adventures in writing through Facebook at JanetSteeleBooks.

This feature require that you enable JavaScript in your browser.
END_OF_DOCUMENT_TOKEN_TO_BE_REPLACED

END_OF_DOCUMENT_TOKEN_TO_BE_REPLACED

This feature require that you enable JavaScript in your browser.
END_OF_DOCUMENT_TOKEN_TO_BE_REPLACED