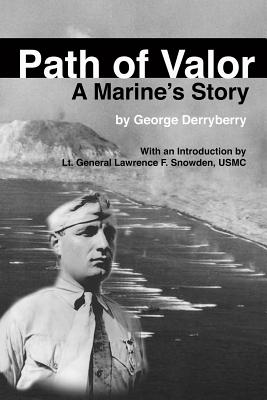 By George Derryberry
$15.00
Not in-stock currently- expect arrival in 1-14 business days
(This book cannot be returned.)

In 1945, United States Marine Sergeant Harris C. Ayres of the Twenty-Third Marines etches an enigmatic message on his canteen as the battle for Iwo Jima rages around him. Decades later, author and former marine George Derryberry finds the same canteen, still bearing Ayres's undelivered message. The discovery sparks an intense investigation, as an intrigued Derryberry reconstructs the life and service of Harris Ayres and struggles to decipher the meaning behind the canteen's message. Through interviews with surviving members of the Twenty-Third Marines and painstaking studies of military records and operational reports, Derryberry reveals the story of Ayres and his small unit as they move and fight with the Fleet Marine Force Pacific. Harris Ayres fought in four of the most savage battles in military history. The young machine gunner and squad leader was present as the Fourth Marine Division captured Roi-Namur, Saipan, Tinian, and Iwo Jima. Resistance at each island was fierce, as the marines fought a well-trained enemy willing to die before surrendering an inch of ground. Through Derryberry's extensive research, Sergeant Ayres's military service comes to life in vivid detail, even as it raises questions. What was the meaning of Ayres's message, so important to the Marine he scratched it onto his canteen in the short breaks between combat? Who was Betty, the woman mentioned in the message? And did Marine Sergeant Ayres come home, or did he, as so many of his comrades did, pay the ultimate sacrifice on the sands of Iwo Jima? Path of Valor: A Marine's Story puts a personal face on one of the greatest challenges ever undertaken by the US Marines. A tale of honor, courage, and sacrifice, Sergeant Ayres's tale stands as a tribute to the thousands of men who fought and died for us in the dark days of World War II.

This feature require that you enable JavaScript in your browser.
END_OF_DOCUMENT_TOKEN_TO_BE_REPLACED

END_OF_DOCUMENT_TOKEN_TO_BE_REPLACED

This feature require that you enable JavaScript in your browser.
END_OF_DOCUMENT_TOKEN_TO_BE_REPLACED