The Lives They Saved: The Untold Story of Medics, Mariners and the Incredible Boatlift That Evacuated Nearly 300,000 People on 9/11 (Hardcover) 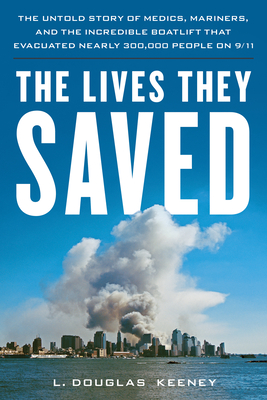 Douglas Keeney is an historian, researcher, speaker and author of more than a dozen books on American history. After spending sixteen years as an advertising executive at many of the top advertising agencies including Ogilvy & Mather and Young & Rubicam, he launched Douglas Keeney & Company, a publishing and production firm that includes content creation for cable television networks and book packaging. In 1992, Keeney cofounded The Military, now Discovery Communications, and hosted the series "On Target." He is probably best-known for unearthing the official U.S. manual on how the government would function after a devastating nuclear attack - the basis for his book by the same name, The Doomsday Scenario, excerpted by the New York Times. This was followed by the first exhaustive history of the air war against Nazi Germany in the bestseller, The Pointblank Directive (Osprey/London). The Eleventh Hour (Wiley) was another bestseller and was widely reviewed as ground breaking and comprises unseen diaries and logs chronicling Franklin D. Roosevelt's trip to the 1943 Tehran Conference. He is also the editor of the Lost Histories of World War II book series. He has appeared on Fox, The Discovery Channel, CBS, PBS, and The Learning Channel. Keeney earned his Bachelors and Masters degrees from the University of Southern California. During his years in marketing he won numerous awards for new product development. A pilot and scuba diver, he lives in Louisville, Kentucky, with his wife, the journalist Jill Johnson Keeney.

This feature require that you enable JavaScript in your browser.
END_OF_DOCUMENT_TOKEN_TO_BE_REPLACED

END_OF_DOCUMENT_TOKEN_TO_BE_REPLACED

This feature require that you enable JavaScript in your browser.
END_OF_DOCUMENT_TOKEN_TO_BE_REPLACED