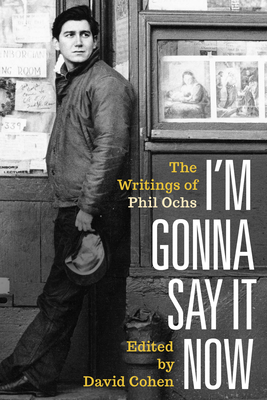 Phil Ochs is known primarily as a songwriter; however, his oeuvre extends far beyond that--to short stories, poetry, criticism, journalism, and satire, all of which are included in I'm Gonna Say It Now: The Writings of Phil Ochs, which represents the majority of what Ochs wrote outside of his large circle of songs. This comprehensive tome presents another side of the famous topical songwriter, showcasing his prose and poetry from across the full span of his life. From prizewinning stories and clear-eyed reporting while a journalism major in college to music criticism, satires, and political pieces written while part of the burgeoning folk scene of New York City in the early 1960s and during the tumultuous Vietnam War era; from sharp and lyrical poems (many previously unpublished) to reviews, features, and satires written while living in Los Angeles and the final, elegiac coda writings from near the end of his life--I'm Gonna Say It Now presents the complete picture. The book includes many rare or nearly impossible to find Ochs pieces, as well as previously unpublished works sourced from the unique holdings in the Ochs Archives at the Woody Guthrie Center. Additionally, never-before-seen reproductions from Ochs's journals, notebooks, and manuscripts provide a closer look at the hand of the artist, giving a deeper context and understanding to his writings. Never before published photographs of Ochs bestow the visual cherry on top.

Phil Ochs was born in El Paso, Texas, in 1940. After attending Staunton Military Academy, Ochs became political while a journalism major at Ohio State University. Forsaking his college degree, Ochs moved to New York City in 1962 to join the burgeoning folk scene. Most well known as a topical singer-songwriter, Ochs was also an anti-Vietnam War and civil rights activist, performing at countless rallies, benefits and marches (authoring the seminal anti-war song "I Ain't Marching Anymore"). Ochs recorded three albums for Elektra Records before moving westward to Los Angeles and A&M Records. Ochs died, by his own hand, in Far Rockaway, Queens, in 1976.

This feature require that you enable JavaScript in your browser.
END_OF_DOCUMENT_TOKEN_TO_BE_REPLACED

END_OF_DOCUMENT_TOKEN_TO_BE_REPLACED

This feature require that you enable JavaScript in your browser.
END_OF_DOCUMENT_TOKEN_TO_BE_REPLACED