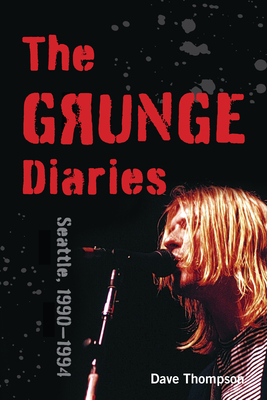 Throughout the 1990s, Dave Thompson was the Seattle-based contributing editor to Alternative Press magazine-America's biggest-selling and most influential alternative rock monthly-and a regular contributor to other publications both nationally and internationally. Throughout this decade, grunge music ruled the world and Seattle was its birthplace and focal point. Thompson was an eyewitness to it all. His writings and interviews chronicled the entire history of grunge-from its roots in the earliest explosion of punk in the mid-1970s to its rise and ultimate fall from grace in the late 1990s. Drawing from Thompson's extensive experience and research-from personal files and journals and hours of interviews with both musicians and fans, other music industry figures, and a wealth of characters from the Seattle scene-The Grunge Diaries is an exhaustive account of this unique era. Featured are all of the major acts-Nirvana, Pearl Jam, Mudhoney, Soundgarden-and many lesser known bands and artists. But it's not only about the music, the fashions, and the personalities that still resonate today. The Grunge Diaries also tells the tale of the end of an era in American history-twentieth-century music culture's last hurrah before the dot-com monsters (many of whom were themselves based in Seattle) devoured its soul and faceless corporations rebranded entertainment. These were the days when fame was still within reach of anyone who knew three chords and had three friends.

DAVE THOMPSON is the author of over 150 books, including co-written memoirs with New York Doll Sylvain Sylvain, Motown legends Brian and Eddie Holland (forthcoming), Hawkwind's Nik Turner, the Yardbirds' Jim McCarty, Fairport Convention's Judy Dyble, and more. He is a columnist for Goldmine magazine, and his work has also appeared in Rolling Stone, Spin, Alternative Press, Mojo, Record Collector, and many other major publications. He has contributed to music documentaries produced by VH-1, A&E, the BBC, and others. Born in the UK, Thompson is now a resident of Delaware.

This feature require that you enable JavaScript in your browser.
END_OF_DOCUMENT_TOKEN_TO_BE_REPLACED

END_OF_DOCUMENT_TOKEN_TO_BE_REPLACED

This feature require that you enable JavaScript in your browser.
END_OF_DOCUMENT_TOKEN_TO_BE_REPLACED