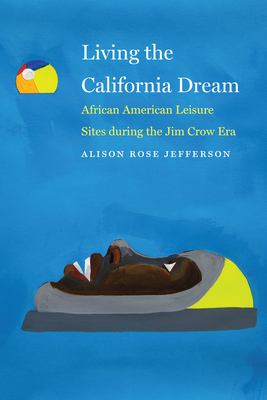 As Southern California was reimagining leisure and positioning it at the center of the American Dream, African American Californians were working to make that leisure an open, inclusive reality. By occupying recreational sites and public spaces, African Americans challenged racial hierarchies and marked a space of Black identity on the regional landscape and social space.

In Living the California Dream Alison Rose Jefferson examines how African Americans pioneered America’s “frontier of leisure” by creating communities and business projects in conjunction with their growing population in Southern California during the nation’s Jim Crow era. By presenting stories of Southern California African American oceanfront and inland leisure destinations that flourished from 1910 to the 1960s, Jefferson illustrates how these places helped create leisure production, purposes, and societal encounters.

Black communal practices and economic development around leisure helped define the practice and meaning of leisure for the region and the nation, confronted the emergent power politics of recreational space, and set the stage for the sites as places for remembrance of invention and public contest. Living the California Dream presents the overlooked local stories that are foundational to the national narrative of mass movement to open recreational accommodations to all Americans and to the long freedom rights struggle.

Alison Rose Jefferson is an independent historian and heritage conservation consultant. She is a scholar in residence with the Institute for the Study of Los Angeles at Occidental College, working to re-center the African American experience in local history and heritage conservation efforts. Previously she did research and narrative production for the Belmar History + Art project and Central Avenue heritage trail with Angels Walk LA.

"Alison Rose Jefferson documents a world I knew little about before reading her new important book. . . . Her book is a credit and an homage to the Black folk who toughed it out, bearing the indignity of police surveillance, arson, and financial and psychological violence so that their descendants could prosper."—Eisa Nefertari Ulen, Los Angeles Review of Books

"This work persuasively highlights the importance of public history and memory to combat the erasure of Black and local history. With the research from this book also being used to support campaigns to recognize African American leisure sites, like Bruce’s Beach, via plaques, site renaming, and through public education, Jefferson simultaneously demonstrates the more practical application of public history."—Jeanelle K. Hope, Western Historical Quarterly

"Jefferson’s book is a recommended read not only for public historians, but for the general public interested in understanding how easily local history can be lost, and how crucial the work to reclaim these overlooked narratives is in better understanding the past, present, and future of our nation."—Melissa A. Esmacher, Public Historian

“Jefferson brings the multi-decade campaign for black access to leisure areas into the long civil rights movement and reminds us that recreation and racial justice propelled black Southern California’s desire to enjoy the beaches, lakes, and valleys of the region.”—Quintard Taylor, Scott and Dorothy Bullitt Professor of American History (emeritus) at the University of Washington, Seattle, and founder of BlackPast.com

“This is an important book. It brings to life those Southern California places fundamental to the construction of an African American California Dream. And it does so by thoughtfully considering the lives of those people whose tough struggles for a piece of the California sun were marked by inspirational courage.”—William Deverell, director of the Huntington–USC Institute on California and the West

“In this meticulously researched work of historical reimagining, Jefferson offers a southern California leisure world of African American place-makers and community builders during the Jim Crow era. Seaside recreation, black-owned businesses, and a refusal to give up. What’s here is new and important.”—Krista Comer, professor of English at Rice University and author of Surfer Girls in the New World Order

“From Bruce Beach in Manhattan Beach to Eureka Villa in the San Clarita Valley, Jefferson’s book unearths a fascinating and forgotten—if not willfully obscured—history of African American leisure sites in the Golden State. This remarkable study broadens our understanding of black life, leisure, and struggles for integration in early twentieth century California, underlines the complex relationship between the promise of the American West and the realities of Jim Crow, and emphasizes the need to protect more diverse African American sites that have been heretofore underappreciated.”—Brent Leggs, executive director of the African American Cultural Heritage Action Fund, National Trust for Historic Preservation

“Jefferson’s pathbreaking study places African American leisure at the heart of Los Angeles history, African American, urban, and suburban history, and the histories of recreation and Civil Rights, and reclaims their places of leisure, demonstrating why they matter to us all.”—Lawrence Culver, author of The Frontier of Leisure: Southern California and the Shaping of Modern America

“Alison Jefferson interrogates five sites of memory in Southern California to illuminate how African Americans challenged established racial hierarchies while occupying public spaces and sites of recreation. Jefferson’s path-breaking scholarship reclaims these frontiers of leisure and reanimates their contested, hidden histories, locating Black Angelenos in their own pieces of the California Dream. Jefferson’s account reveals how de facto Jim Crow operated openly in California—contrary to the Golden State’s popular reputation as an Edenic place of equal opportunity and access.”—Anthea M. Hartig, director of the National Museum of American History

“Alison Jefferson’s important and timely work creatively expands our understanding of the possibilities and limits of the California dream for Black Americans. Jefferson demonstrates how the desire and the struggle to enjoy the leisure opportunities of the region reveals much about how Black Angelenos confronted and struggled against racism that was a painful and resilient as that which they hoped to have left behind when they migrated west in search of the California dream.”—Lonnie G. Bunch III, founding director of the National Museum of African American History and Culture and author of Call the Lost Dream Back: Essays on History, Race, and Museums

This feature require that you enable JavaScript in your browser.
END_OF_DOCUMENT_TOKEN_TO_BE_REPLACED

END_OF_DOCUMENT_TOKEN_TO_BE_REPLACED

This feature require that you enable JavaScript in your browser.
END_OF_DOCUMENT_TOKEN_TO_BE_REPLACED