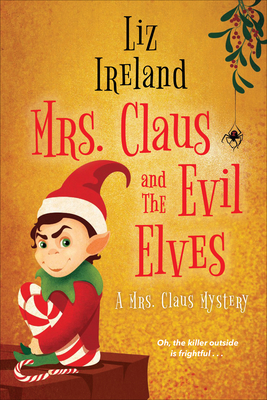 This is book number 3 in the A Mrs. Claus Mystery series.

April Claus has grown to love her new North Pole home almost as much as she loves her husband, Nick—Santa himself. But even in Christmastown, the holidays can be murder…

April Claus is getting an early gift for her second Christmas in Santaland. Her dear friend, Claire, is visiting from Oregon, and April hopes to show off her adoptive country at its cozy, glittering best. But when the annual ice sculpture contest is derailed by a kamikaze drone-deer, it’s just the first in a series of un-festive events…

Drone-deer, created by inventor elf Blinky Brightlow, are none too popular with the genuine, flesh-and-hoof kind, who are currently on strike. With no reindeer games to keep them in shape, Nick worries they may get too chunky to pull his sleigh come Christmas. Now Blinky is missing, his girlfriend, Juniper, is under suspicion, and between rogue reindeer and conniving elves, all of Santaland seems to have gone sugarplum-crazy. Add a dash of murder to the mix, and suddenly April is battling not just to clear Juniper’s name, but to save herself from being put on ice—permanently…

Liz Ireland is the author of many works of women's fiction, romance, and mystery. She also writes under the names Elizabeth Bass and Liz Freeland. Like her character April Claus, Liz spends too much time in concert bands. Originally from the United States, she now lives on Vancouver Island in British Columbia. She’s currently working on the next Mrs. Claus mystery. Visit her at LizIreland.Wordpress.com.

This feature require that you enable JavaScript in your browser.
END_OF_DOCUMENT_TOKEN_TO_BE_REPLACED

END_OF_DOCUMENT_TOKEN_TO_BE_REPLACED

This feature require that you enable JavaScript in your browser.
END_OF_DOCUMENT_TOKEN_TO_BE_REPLACED