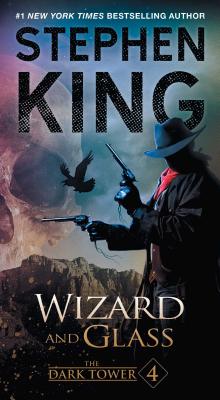 This is book number 4 in the The Dark Tower series.

The fourth volume in the brilliant Dark Tower Series is “splendidly tense…rip-roaring” (Publishers Weekly)—a #1 national bestseller about an epic quest to save the universe.

In Wizard and Glass, Stephen King is “at his most ebullient…sweeping readers up in…swells of passion” (Publishers Weekly) as Roland the Gunslinger, Eddie, Susannah, and Jake survive Blaine the Mono’s final crash, only to find themselves stranded in an alternate version of Topeka, Kansas, that has been ravaged by the superflu virus. While following the deserted I-70 toward a distant glass palace, Roland recounts his tragic story about a seaside town called Hambry, where he fell in love with a girl named Susan Delgado, and where he and his old tet-mates Alain and Cuthbert battled the forces of John Farson, the harrier who—with a little help from a seeing sphere called Maerlyn’s Grapefruit—ignited Mid-World’s final war.

Filled with “blazing action” (Booklist), the fourth installment in the Dark Tower Series “whets the appetite for more” (Bangor Daily News). Wizard and Glass is a thrilling read from “the reigning King of American popular literature” (Los Angeles Daily News).

Stephen King is the author of more than sixty books, all of them worldwide bestsellers. His recent work includes If It Bleeds, The Institute, Elevation, The Outsider, Sleeping Beauties (cowritten with his son Owen King), and the Bill Hodges trilogy: End of Watch, Finders Keepers, and Mr. Mercedes (an Edgar Award winner for Best Novel and a television series streaming on Peacock). His novel 11/22/63 was named a top ten book of 2011 by The New York Times Book Review and won the Los Angeles Times Book Prize for Mystery/Thriller. His epic works The Dark Tower, It, Pet Sematary, and Doctor Sleep are the basis for major motion pictures, with It now the highest-grossing horror film of all time. He is the recipient of the 2020 Audio Publishers Association Lifetime Achievement Award, the 2018 PEN America Literary Service Award, the 2014 National Medal of Arts, and the 2003 National Book Foundation Medal for Distinguished Contribution to American Letters. He lives in Bangor, Maine, with his wife, novelist Tabitha King.

This feature require that you enable JavaScript in your browser.
END_OF_DOCUMENT_TOKEN_TO_BE_REPLACED

END_OF_DOCUMENT_TOKEN_TO_BE_REPLACED

This feature require that you enable JavaScript in your browser.
END_OF_DOCUMENT_TOKEN_TO_BE_REPLACED