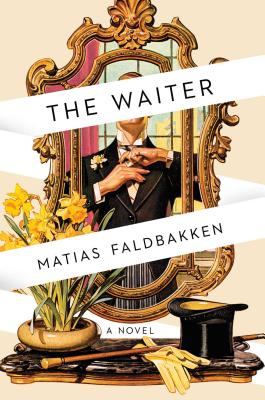 By Matias Faldbakken
$24.99
Email or call for price.

In the tradition of modern classics The Dinner and A Gentleman in Moscow comes The Waiter, in which the finely tuned balance of a grand European restaurant (that has seen better days) is irrevocably upset by an unexpected guest.

In a centuries-old European restaurant called The Hills, a middle-aged waiter takes pride in the unchangeable aspects of his job: the well-worn uniform, the ragged but solid tablecloths, and the regular diners. Some are there daily, like Graham “Le Gris”—also known as The Pig—and his dignified group of aesthetes; the slightly more free-spirited drinking company around Tom Sellers; and the closest one can get to personal friends of the waiter, Edgar and his young daughter, Anna.

In this universe unto itself, there is scarcely any contact between the tables...until a beautiful and well-groomed young woman walks through the door and upsets the delicate balance of the restaurant and all it has come to represent.

Like living in a snow globe, The Waiter is a captivating study in miniature. Everything is just so, and that’s exactly how the waiter needs it to be. One can understand why he becomes anxious when things begin to change. In fact, given the circumstances, anxiety just might be the most sensible response...

With the sophistication of The Remains of the Day and the eccentricity of The Elegance of the Hedgehog, The Waiter marks the North American debut of an exciting new voice in literary fiction.

Matias Faldbakken is a world-renowned contemporary artist and writer who shows with the Paula Cooper Gallery in New York, and has been hailed as one of the freshest new voices to emerge in Norwegian literature during the past decade. The Waiter is his first novel in nine years and the very first he has written under his own name.

"[Faldbakken] builds a delicious tension between the paucity of events and the lavishness of the technique with which they are described. His waiter, though taciturn while on duty, is a chatterbox as a narrator, providing a busy, intricate analysis until each minor stumble achieves seismic status. Played in slow motion, his malfunctions unspool as slapstick with an undertow of dread. As the story moves along, the waiter loses his sense of who he is and what he’s supposed to be doing so completely that he starts to seem like a man who could do anything. He’s like Travis Bickle played by Buster Keaton." –The New York Times Book Review

"There is some satisfaction in reading The Waiter as a quirky slice of life… If you follow the author’s clues, you may feel a chill up your spine. You may see the waiter in a different light… You can read this surprising book several different ways." –The Los Angeles Times

"[A] droll, understated debut novel by a Norwegian artist and writer... Bringing to mind Mervyn Peake and Wes Anderson, with some of Nathanael West's deadpan grotesque, this is a beguiling, quirky entertainment." –Kirkus Reviews, starred review

"As if The Remains of the Day had been written by Kingsley Amis, The Waiter is a brilliantly exquisite view into an uproariously vigilant life of service and protocol. In Faldbakken's skilled hands, a mordant, lonely waiter in a declining restaurant becomes a raw, scrupulous force, powering one of the most purely entertaining novels I've read in years. This book is a meal you won't want to finish." –J. Ryan Stradal, New York Times bestselling author of Kitchens of the Great Midwest

"Faldbakken, who's also a visual artist, paints the Hills' interiors, the waiter's psyche, and diners' interactions with a deep, often-funny theatricality. For those who love encapsulated novels with a touch of the absurd." –Booklist

This feature require that you enable JavaScript in your browser.
END_OF_DOCUMENT_TOKEN_TO_BE_REPLACED

END_OF_DOCUMENT_TOKEN_TO_BE_REPLACED

This feature require that you enable JavaScript in your browser.
END_OF_DOCUMENT_TOKEN_TO_BE_REPLACED