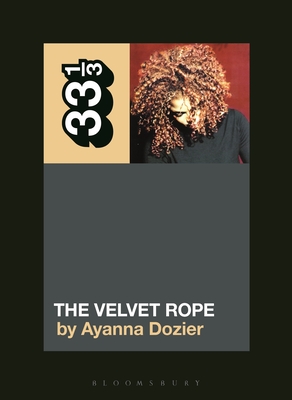 The question of control for Black women is a costly one. From 1986 onwards, the trajectory of Janet Jackson's career can be summed up in her desire for control. Control for Janet was never simply just about her desire for economic and creative control over her career but was, rather, an existential question about the desire to control and be in control over her bodily integrity as a Black woman.

This book examines Janet's continuation of her quest for control as heard in her sixth album, The Velvet Rope. Engaging with the album, the promotion, the tour, and its accompanying music videos, this study unpacks how Janet uses Black cultural production as an emancipatory act of self-creation that allows her to reconcile with and, potentially, heal from trauma, pain, and feelings of alienation. The Velvet Rope's arc moves audiences to imagine the possibility of what emancipation from oppression--from sexual, to internal, to societal--could look like for the singer and for others. The sexually charged content and themes of abuse, including self-harm and domestic violence, were dismissed as "selling points" for Janet at the time of its release. The album stands out as a revelatory expression of emotional vulnerability by the singer, one that many other artists have followed in the 20-plus years since its release.

Ayanna Dozier is a scholar, filmmaker, and performance artist. Her dissertation, Mnemonic Aberrations, traces the history of Black feminist experimental short film in the United States and the United Kingdom from 1968-Present. She was also a 2018-2019 Helena Rubinstein Fellow in Critical Studies at the Whitney Independent Studies Program. She resides in Brooklyn, NY

This feature require that you enable JavaScript in your browser.
END_OF_DOCUMENT_TOKEN_TO_BE_REPLACED

END_OF_DOCUMENT_TOKEN_TO_BE_REPLACED

This feature require that you enable JavaScript in your browser.
END_OF_DOCUMENT_TOKEN_TO_BE_REPLACED