Empire of the Air: The Men Who Made Radio (Paperback) 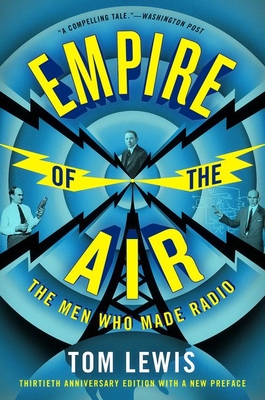 Empire of the Air tells the story of three American visionaries--Lee de Forest, Edwin Howard Armstrong, and David Sarnoff--whose imagination and dreams turned a hobbyist's toy into radio, launching the modern communications age. Tom Lewis weaves the story of these men and their achievements into a richly detailed and moving narrative that spans the first half of the twentieth century, a time when the American romance with science and technology was at its peak. Empire of the Air is a tale of pioneers on the frontier of a new technology, of American entrepreneurial spirit, and of the tragic collision between inventor and corporation.

Tom Lewis is Professor Emeritus of English at Skidmore College. His most recent book is Washington. In addition to his numerous books, he has written and produced award-winning documentary films for Florentine Films and public television. He lives in Maine.

This feature require that you enable JavaScript in your browser.
END_OF_DOCUMENT_TOKEN_TO_BE_REPLACED

END_OF_DOCUMENT_TOKEN_TO_BE_REPLACED

This feature require that you enable JavaScript in your browser.
END_OF_DOCUMENT_TOKEN_TO_BE_REPLACED