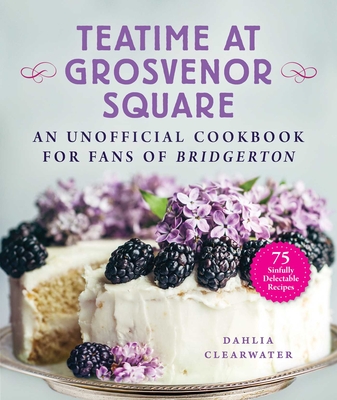 You are cordially invited to dine with society’s finest! From the magnificent macaron towers to the heavenly fruit-topped trifles, the food of Bridgerton steals the show. Teatime at Grosvenor Square brings you 75 tempting recipes inspired by those candy-colored treats and opulent feasts.

Now you can create a spread of delicate finger sandwiches, captivating canapés, and bite-sized sweets scrumptious enough to impress Queen Charlotte herself! Plus, you’ll find a few recipes worthy of a Bridgerton family supper.

This delightful book includes recipes for:
Whether you choose to enjoy a delicious confection with Daphne or a strong cocktail with the Duke, Teatime at Grosvenor Square will make binge-watching Bridgerton even better!

Dahlia Clearwater is a baker and Bridgerton fan who spends her days dreaming up elegant spreads for high teas and luncheons. When work gets busy, she tries her best to channel Eloise’s entrepreneurial spirit. Dahlia lives in New York City with her dashing husband, their two boys, and one opinionated Yorkshire terrier.

Praise for Teatime at Grosvenor Square

“Clearwater, a devotee of Netflix’s Bridgerton and Julia Quinn’s bestselling novels, dishes out sumptuous teatime offerings inspired by the Regency-era drama in this seductive debut . . . Turn to this volume for a tempting taste of Queen Charlotte’s London.” —Publishers Weekly

“More than an afternoon of small plates . . . across five sections, the 75 recipes range from canapés to full-on hearty dinners. . . . Want to sample at least five different flavors of scones, or old-fashioned dishes like macarons and creamy vanilla flummery? They're all here in a thoroughly modern version of the UK custom.” —Booklist

"After the Regency-era romance Bridgerton took over everyone’s television screens, fans became obsessed with everything to do with the show and book series. Add to your friend’s collection of books with this unofficial cookbook based on the Grosvenor Square family. This book contains 75 recipes ready for teatime that will impress any suitor." —Culturess

"A scandalous, sexy romantic fantasy that lives up to the hype." —Good Morning America

"Shonda Rhimes’ debut series for Netflix applies her signature flair for juicy drama to a tale of high-society matchmaking in Regency-era England. . . . a breezy waltz through a world of balls and duels, courtiers and curtseys, true love and ladies who may not be so interested in waiting . . . There's a charming wink to it all." —Rolling Stone

"A confectionary treat of a romance . . . a swoony, refreshingly modern take on Regency romance." —Variety

"Glitters with period drama glory. . . . To some, Bridgerton might seem like a combination of Pride and Prejudice and Gossip Girl: An unseen gossipmonger plays loose with the lives of well-to-do young socialites in 19th-century London. But dismissing a story set in upper-class England as an Austen copycat is reductive. As formidable and beloved a writer as she was, Austen never penned anything so unabashedly sexy, so deliciously melodramatic and with so many orchestral versions of pop songs (try to pick out the Billie Eilish and Taylor Swift hits)." —USA Today

This feature require that you enable JavaScript in your browser.
END_OF_DOCUMENT_TOKEN_TO_BE_REPLACED

END_OF_DOCUMENT_TOKEN_TO_BE_REPLACED

This feature require that you enable JavaScript in your browser.
END_OF_DOCUMENT_TOKEN_TO_BE_REPLACED