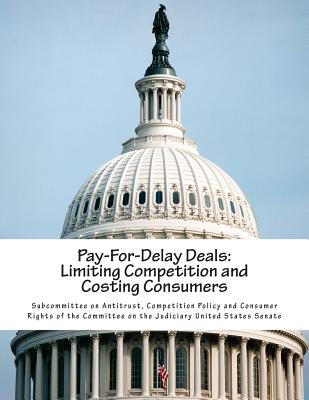 By Competition P Subcommittee on Antitrust
$18.95
Not in-stock currently- expect arrival in 1-14 business days
(This book cannot be returned.)

In 2012, analysts estimate that Americans spent $325 billion on prescription drugs and they predict that drug sales will rise by more than four percent in the year 2014. Generic drugs, which can cost as much as 90 percent lower than brand-name drugs, help rein in the costs. A brand-name drug that costs $300 per month might be sold as a generic for as little as $30 per month, but for several years, pay-for-delay deals have robbed consumers of cost-saving generic drugs. At the very core, these deals involve collusion between brand and generic competitors to keep generic competition off the market. A brand-name drug company pays their generic competitor cash or another form of payment. In exchange, the generic delays its entry into the marketplace. The brand company wins because it gets to maintain its monopoly, and the generic company wins because they get paid more than they would have if they came to market. But American consumers and American taxpayers lose out on lower-cost generic drugs to the tune of billions of dollars each year, $3.5 billion according to the Federal Trade Commission.

This feature require that you enable JavaScript in your browser.
END_OF_DOCUMENT_TOKEN_TO_BE_REPLACED

END_OF_DOCUMENT_TOKEN_TO_BE_REPLACED

This feature require that you enable JavaScript in your browser.
END_OF_DOCUMENT_TOKEN_TO_BE_REPLACED