On the Wandering Paths (Univocal) (Paperback) 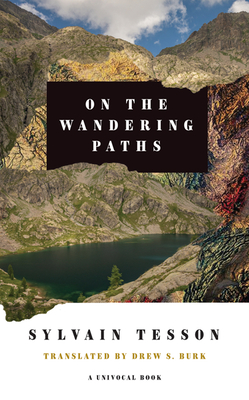 A walking journey through France’s vast interior becomes a meditation on both personal recovery and the role of history in the present—more than 425,000 copies sold in France

After a free-climbing accident lands him in a coma and a hospital for four months, the French writer Sylvain Tesson makes a promise to himself: if he’s ever able to walk again, he will traverse the entire country of France on foot.

Part literary adventure, part philosophical reflection on our contemporary consumer culture, On the Wandering Paths takes us deep into the heart of what Tesson terms France’s “hyperrural” zones. Tracing the obscure paths peasants once followed throughout the countryside, Tesson embarks on a three-month journey of solitude and personal contemplation as he walks along vast stretches of mountain ranges and rivers, encountering ancient Roman stone bridges and walkways, the French Foreign Legion, pagan prayer sites, Provençal villages, and the majestic Mont-Saint-Michel. Connecting deeply with the places he visits, his experiences inspire reflection on the essential need to disengage from the digital and immerse oneself in natural beauty.

Rich with humor, historical insight, and literary power, On the Wandering Paths is both a meditation on the act of recovery and a potent recognition of the traces of our past in the present. Asking us to reassess our values and our relationship to the land, Tesson’s exquisite chronicle through landscapes that continue to resist urbanization and technology is a thoughtful—and thought-provoking—glimpse into a poet’s adventurous life. Les Chemins de Pierre, a film based on the book starring Jean Dujardin, is due to release in 2022.

Sylvain Tesson has walked from Russia to India, participated in archaeological digs in Afghanistan and Pakistan, and wintered alone in a cabin on Lake Baikal in Siberia. One of France’s most celebrated writers, he has been awarded the Prix Médicis and the Prix Goncourt de la nouvelle. He is author of The Consolations of the Forest and The Art of Patience: Seeking the Snow Leopard in Tibet, which won the 2019 Prix Renaudot.

Drew S. Burk is the editor of the Univocal series with the University of Minnesota Press and translator of several works of continental philosophy and theory, including Felwine Sarr’s Afrotopia (Minnesota, 2019).

"On the Wandering Paths places Sylvain Tesson in a long tradition of writers fleeing civilization to find something older than empire.... part of a fresh syllabus for rejecting the world we’ve inherited."—Daniel Hornsby, from the Foreword

"Sylvain Tesson’s On the Wandering Paths is an epic journey through the mountainous landscape of southern France. Revealing intimate knowledge of both the peasant landscape and its history, it is also Tesson’s autobiography as an explorer and lyricist. A rare book in the traveling genre for everyone who dreams of leaving the rat race behind to find meaning in the beauty of nature."—Rane Willerslev, director, National Museum of Denmark

This feature require that you enable JavaScript in your browser.
END_OF_DOCUMENT_TOKEN_TO_BE_REPLACED

END_OF_DOCUMENT_TOKEN_TO_BE_REPLACED

This feature require that you enable JavaScript in your browser.
END_OF_DOCUMENT_TOKEN_TO_BE_REPLACED