Let the Lord Sort Them: The Rise and Fall of the Death Penalty (Paperback) 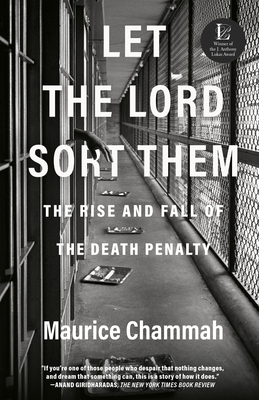 NEW YORK TIMES EDITORS’ CHOICE • A deeply reported, searingly honest portrait of the death penalty in Texas—and what it tells us about crime and punishment in America

“If you’re one of those people who despair that nothing changes, and dream that something can, this is a story of how it does.”—Anand Giridharadas, The New York Times Book Review

In 1972, the United States Supreme Court made a surprising ruling: the country’s death penalty system violated the Constitution. The backlash was swift, especially in Texas, where executions were considered part of the cultural fabric, and a dark history of lynching was masked by gauzy visions of a tough-on-crime frontier. When executions resumed, Texas quickly became the nationwide leader in carrying out the punishment. Then, amid a larger wave of criminal justice reform, came the death penalty’s decline, a trend so durable that even in Texas the punishment appears again close to extinction.

In Let the Lord Sort Them, Maurice Chammah charts the rise and fall of capital punishment through the eyes of those it touched. We meet Elsa Alcala, the orphaned daughter of a Mexican American family who found her calling as a prosecutor in the nation’s death penalty capital, before becoming a judge on the state’s highest court. We meet Danalynn Recer, a lawyer who became obsessively devoted to unearthing the life stories of men who committed terrible crimes, and fought for mercy in courtrooms across the state. We meet death row prisoners—many of them once-famous figures like Henry Lee Lucas, Gary Graham, and Karla Faye Tucker—along with their families and the families of their victims. And we meet the executioners, who struggle openly with what society has asked them to do. In tracing these interconnected lives against the rise of mass incarceration in Texas and the country as a whole, Chammah explores what the persistence of the death penalty tells us about forgiveness and retribution, fairness and justice, history and myth.

Written with intimacy and grace, Let the Lord Sort Them is the definitive portrait of a particularly American institution.

Maurice Chammah is a journalist and staff writer for The Marshall Project. His reporting on the criminal justice system has been published by The New Yorker, The New York Times, The Atlantic, Esquire, and Mother Jones. He lives in Austin, Texas, where he and his wife Emily Chammah co-organize The Insider Prize, a fiction and essay contest for incarcerated writers sponsored by American Short Fiction.

“Maurice Chammah’s book comes at an important time. . . . Chammah embeds well-wrought cultural analysis within the ins and outs of historical narrative. . . . Chammah zeroes in on one detail at a time, but his intent to provide both texture and breadth is evident. . . . The accumulation of moments and personalities in the story of the death penalty in America is exactly what makes Chammah’s account so compelling.”­­­­­­—The Christian Century

“A searing history of the rise and fall of capital punishment . . . Let the Lord Sort Them urges readers to reckon with the ugliest aspects of Texas history, and with how the political debate over the death penalty has elided the long-lasting trauma that executions inflict on everyone involved.”—Texas Monthly

“It’s a book pitched straight into the gulf between universal theory and individual experience.”—Josephine Livingstone, The New Republic

“Maurice Chammah has given us an indispensable history of how the debate over capital punishment has taken shape in our courts. And by centering the book deep in the heart of Texas, ‘the epicenter of the death penalty,’ he lays bare the human experience of litigating these heartrending cases through remarkably intimate, fair-minded, and trustworthy reporting on the people arguing over the fate of human life.”—Robert Kolker, New York Times bestselling author of Hidden Valley Road: Inside the Mind of an American Family

“When we arrogate to ourselves the prerogatives of the gods, the inconsistencies and stupidities of our behaviors become more glaring and more disturbing. In this magisterial study, Maurice Chammah is here to tell us about our failures, and how we can do better.”—Errol Morris, director of The Thin Blue Line

“An extraordinarily hopeful glimpse of a future in which we are finally beginning to imagine a very different version of justice—one in which the immediate and generational fallout is not so devastating.”—Heather Ann Thompson, Pulitzer Prize–winning author of Blood in the Water: The Attica Prison Uprising of 1971 and Its Legacy

“Superbly reported and beautifully written, Let the Lord Sort Them shines a bright light in the darkest corners of the criminal justice system. It is a masterwork of nonfiction that will stay with you long after you’ve finished reading.”—Gilbert King, Pulitzer Prize–winning author of Devil in the Grove: Thurgood Marshall, the Groveland Boys, and the Dawn of a New America

“Texas and the death penalty have a history, as they say. Melding intimate portraits with sweeping scholarship, he reveals the lies we tell ourselves in the name of justice.”—Ken Armstrong, Pulitzer Prize–winning reporter and co-author of Unbelievable

This feature require that you enable JavaScript in your browser.
END_OF_DOCUMENT_TOKEN_TO_BE_REPLACED

END_OF_DOCUMENT_TOKEN_TO_BE_REPLACED

This feature require that you enable JavaScript in your browser.
END_OF_DOCUMENT_TOKEN_TO_BE_REPLACED