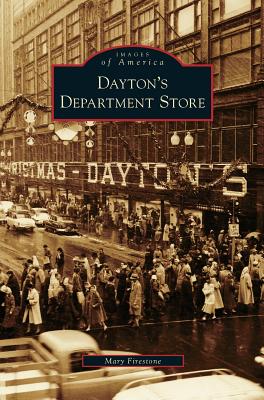 By Mary Firestone
$32.99
Not in-stock currently- expect arrival in 1-14 business days
(This book cannot be returned.)

Dayton's department store, grand in scope and company spirit, enjoyed a century in the limelight as one of the nation's leading retailers. Its disappearance has been a challenge to the community, but it is a sign of the times, as many other urban department stores have shared the same fate. Originally called Goodfellows, the store got its start in 1902 when real estate investor and banker George Draper Dayton became a silent partner in the business. He soon took over the company but had to learn the ropes of retail as he went along since he had never intended to become a merchant. The early years were not without struggles, but Dayton's department store was nevertheless an instant hit with its daylight-filled aisles, generous return policies, and quality merchandise. The Minneapolis store became a vibrant self-contained community with a post office, newspaper, infirmary, laundry, bakery, and even a college. "Daytonians" worked and played together around the clock, in baseball and bowling teams, glee clubs, and orchestras. Over time, the reach of Dayton's extended far into the upper Midwest, with stores in North Dakota, South Dakota, and Wisconsin, including the development of the nation's first indoor mall.

This feature require that you enable JavaScript in your browser.
END_OF_DOCUMENT_TOKEN_TO_BE_REPLACED

END_OF_DOCUMENT_TOKEN_TO_BE_REPLACED

This feature require that you enable JavaScript in your browser.
END_OF_DOCUMENT_TOKEN_TO_BE_REPLACED