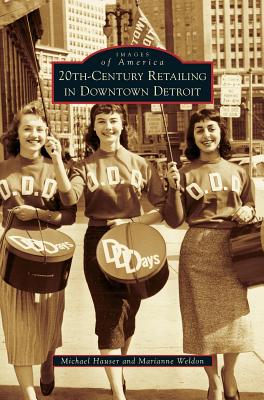 As Detroit developed northward from the riverfront, Woodward Avenue became a mecca for retail, restaurants, and services. The 1870s and 1880s saw many independent merchants open their doors. By 1890, a new type of one-stop shopping had developed: the department store. Detroit's venerable Newcomb Endicott and Company was closely followed by other trailblazers: J. L. Hudson Company, Crowley Milner and Company, and the Ernst Kern Company. At its peak in the 1950s, the Woodward Avenue area boasted over four million square feet of retail, making it one of America's preferred retail destinations. Other Detroit emporiums such as the homegrown S. S. Kresge Company set trends in consumer culture. Generations made the trek downtown for back-to-school events, Easter shows, holiday windows, and family luncheons. Then, with the advent of suburban shopping centers, downtown stores began competing with their own branch locations. By the 1970s and 1980s, the dominoes began to fall as both chain and independent stores abandoned the once prosperous Woodward Avenue.

This feature require that you enable JavaScript in your browser.
END_OF_DOCUMENT_TOKEN_TO_BE_REPLACED

END_OF_DOCUMENT_TOKEN_TO_BE_REPLACED

This feature require that you enable JavaScript in your browser.
END_OF_DOCUMENT_TOKEN_TO_BE_REPLACED