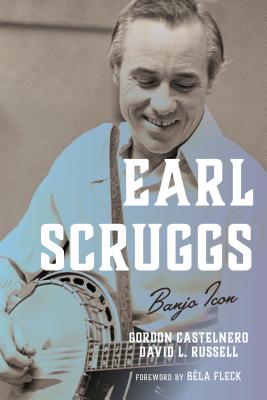 As Earl Scruggs picked his banjo with machine gun precision at his 1945 debut at the Ryman Auditorium, he set in motion a successful career and enduring legacy that would eclipse anything the humble farm boy from North Carolina could have imagined. Scruggs's revolutionary three-finger roll patterns electrified audiences and transformed the banjo into a mainstream solo instrument pursued by innumerable musicians. In Earl Scruggs: Banjo Icon, Gordon Castelnero and David L. Russell chronicle the life and legacy of the man who single-handedly reinvigorated the five-string banjo and left an indelible mark on bluegrass and folk music. After his tenure with the father of bluegrass music, Bill Monroe, Scruggs formed (with Lester Flatt) the Foggy Mountain Boys, also known as Flatt and Scruggs; the Earl Scruggs Revue with his sons; and finally his Family & Friends band. Scruggs released more than forty albums and reached millions of fans through performances on The Beverly Hillbillies and his music's inclusion in the 1967 movie Bonnie and Clyde. Over his long career, Scruggs received numerous accolades and collaborated with stars such as Billy Joel, Elton John, Sting, Johnny Cash, Bob Dylan, Joan Baez, Vince Gill, Travis Tritt, the Byrds, and Steve Martin. Through interwoven interviews with the Scruggs family and more than sixty notable musicians and entertainers, Castelnero and Russell reveal that, despite the fame Scruggs achieved, he never lost his humility and integrity. This biography testifies to Scruggs's enduring influence and sheds light on the history of bluegrass for musicians, students, and anyone entranced by Scruggs's unmistakable sound.

Gordon Castelnero is a freelance documentary writer/producer and author. His local productions have been recognized by the National Academy of Television Arts and Sciences--Michigan Chapter with an Emmy Award and several nominations. David L. Russell is a writer, musician, and banjo teacher, and has toured with a number of bluegrass bands in Michigan and Georgia. He has an MA in philosophy from the University of Detroit (Mercy) and a PhD in history and religion from Michigan State University.

This feature require that you enable JavaScript in your browser.
END_OF_DOCUMENT_TOKEN_TO_BE_REPLACED

END_OF_DOCUMENT_TOKEN_TO_BE_REPLACED

This feature require that you enable JavaScript in your browser.
END_OF_DOCUMENT_TOKEN_TO_BE_REPLACED