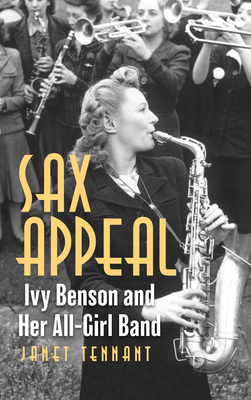 Ivy Benson was born to be a musician. A good pianist by the age of ten, she was influenced by the music of Benny Goodman, Artie Shaw, and other jazz legends to become a professional instrumentalist--and at age fifteen, having taught herself to play the clarinet and saxophone, Benson joined an all-girl band in Yorkshire, England. Sax Appeal chronicles Benson's life--beginning with her childhood of relative poverty, exploring her time as a teenage musician playing in the seedy clubs of London, and highlighting her founding of a professional all-female jazz and swing band that would remain active for over forty years. Benson started her band during the dark days of World War II in 1939 as an antidote to the lack of men, who were all serving in the military. Determined to produce music as good as the male bands, she was a tough coach as well as a mother figure to her young instrumentalists. She faced opposition from most male bandleaders and critics who claimed that women could not play jazz. There were also the dangers and privations of wartime touring--and the constant loss of girls who were lured away by GIs. Nevertheless the band was successful and in great demand. Benson employed well over 250 performers over the years and influenced the careers of many aspiring female jazz musicians. Considered by some to be the instigator of "girl power" and by others an astute businesswoman with a knack for timing, Sax Appeal thoroughly examines the themes and brings the musical pioneer to vivid life.

Janet Tennant is the author of Mistress and Muse, a critically acclaimed biography of Ursula, the poet, librettist, and lover of composer Ralph Vaughan Williams. She lives in Lichfield, England.

This feature require that you enable JavaScript in your browser.
END_OF_DOCUMENT_TOKEN_TO_BE_REPLACED

END_OF_DOCUMENT_TOKEN_TO_BE_REPLACED

This feature require that you enable JavaScript in your browser.
END_OF_DOCUMENT_TOKEN_TO_BE_REPLACED