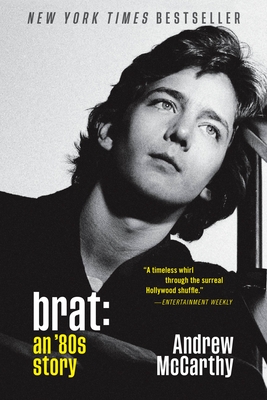 Fans of Patti Smith's Just Kids and Rob Lowe's StoriesI Only Tell My Friends will love this beautifully written, entertaining, and emotionally honest memoir by an actor, director, and author who found his start as an 80s Brat pack member, now in paperback.
Most people know Andrew McCarthy from his movie roles in Pretty in Pink, St. Elmo's Fire, Weekend at Bernie's, and Less than Zero, and as a charter member of Hollywood's Brat Pack. That iconic group of ingenues and heartthrobs included Rob Lowe, Molly Ringwald, Emilio Estevez, and Demi Moore, and has come to represent both a genre of film and an era of pop culture. In his memoir Brat: An '80s Story, McCarthy focuses his gaze on that singular moment in time. The result is a revealing look at coming of age in a maelstrom, reckoning with conflicted ambition, innocence, addiction, and masculinity. New York City of the 1980s is brought to vivid life in these pages, from scoring loose joints in Washington Square Park to skipping school in favor of the dark revival houses of the Village where he fell in love with the movies that would change his life. Filled with personal revelations of innocence lost to heady days in Hollywood with John Hughes and an iconic cast of characters, Brat is a surprising and intimate story of an outsider caught up in a most unwitting success.

Since starring in the movies he recounts throughout Brat, Andrew McCarthy has become a director, an award-winning travel writer, and a bestselling author. He has directed more than eighty hours of television, including Orange in the New Black, The Blacklist, Gossip Girl, and many others. For a dozen years he served as editor at large at National Geographic Traveler, and his award-winning travel writing has appeared in The New York Times, The Atlantic, TIME, and elsewhere. He is the author a travel memoir, The Longest Way Home, and a young-adult novel, Just Fly Away—both New York Times bestsellers.

“With wit, wisdom, and a depth of honesty that will resonate to your core, Andrew McCarthy lays down the armor of an unknowable scared boy to shine light on the complex and conflicting pieces that make up the intelligent, introspective, compassionate, and wise man who is even more lovable than the boy we first fell in love with.”—Demi Moore, actress and New York Times bestselling author of Inside Out

“How lucky we are that Andrew McCarthy, such a key player in the Brat Pack phenomenon, should happen to be so naturally gifted a writer and so piercingly, ruefully, and hilariously wise, intelligent, and insightful a chronicler of that wild ride. He somehow survived the madness, and the result is a truly rewarding addition to the bookshelves of film lovers everywhere.”—Stephen Fry, writer, actor, and comedian

“Andrew McCarthy is one of the best. He’s a dogged character: witty and wry, self-abnegating, always questioning his success. Thanks to his prodigious talents, he succeeds beautifully. This unlikely leading man explores masculinity, success, the dangers of fame, ambition, and cigarettes in this elegant and humorous coming-of-age story of a Brat Pack actor turned director and writer.”—Candace Bushnell, bestselling author and creator of Sex and the City

“My only quibble with this absorbing, thoughtful, and sometimes painfully honest memoir is with the title; McCarthy is anything but a brat. He is certainly an unlikely movie star, and the story of how this diffident and insecure young man found himself at the center of the culture in the 1980s—and then decided to walk away from it all—makes for a fascinating read.”—Jay McInerney, author of Bright Lights, Big City and The Good Life

“[A] heartful memoir…McCarthy is clear-eyed and unsparing about Hollywood but takes the emotional intensity of the actor’s craft and life seriously. The result is a riveting portrait of the artist as a young man.”—Publishers Weekly

"McCarthy ponders some of the biggest and most frightening questions surrounding intimacy: How does a loner connect? How does a traveler settle down? How do we merge into families without losing ourselves? The answer seems to be that all these things are impossible...and yet somehow we do it anyway. There is much to be learned, and much to be admired, in this elegant, thoughtful story."—Elizabeth Gilbert, bestselling author of Eat, Pray, Love

"Combining the best aspects of Paul Theroux's misanthropy in books like Old Patagonian Express and Elizabeth Gilbert's emotions in Eat, Pray, Love, this book is hard to put down. Bound to be popular, this compelling and honest chronicle will not disappoint readers."—Library Journal

"Andrew McCarthy treks from Baltimore to the Amazon, exploring his commitment issues as fearlessly as he scales Mount Kilimanjaro."—Elle

"Brave and moving. . . McCarthy's keen sense of scene and storytelling ignites his accounts...[t]hreaded with an exemplary vulnerability and propelled by a candid exploration of his own life's frailties."—National Geographic

"This is not some memoir written by an actor who fancies himself a world traveler. McCarthy really is a world traveler - and a damned fine writer, too...To readers who think, "Andrew McCarthy? Really?" the answer is a resounding and emphatic yes. Really."—Booklist

"Rarely have I seen the male psyche explored with such honesty and vulnerability. This is the story of a son, a father, a brother, a husband, a man who finds the courage not only to face himself, but to reveal himself, and, in so doing, illuminates something about what it is to be human, fully alive, and awake."—Dani Shapiro, author of Devotion

"It's hard to write books that are both adventurous and touching, but Andrew McCarthy manages to pull it off and more! A smart, valuable book."—Gary Shteyngart, bestselling author of Super Sad True Love Story and Absurdistan

"Where lesser writers might reach for hyperbole and Roget to describe such exotic lands as Patagonia, Kilimanjaro and Baltimore, in The Longest Way Home, McCarthy leans on subtlety, a straightforward style and hard-won insights to allow his larger stories to unfold. It's not hard to imagine him as the solitary figure in the café, scribbling in a notebook by candlelight, making the lonely, tedious work of travel writing look romantic and easy."—Chuck Thompson, author of Better Off Without 'Em and Smile When You're Lying

This feature require that you enable JavaScript in your browser.
END_OF_DOCUMENT_TOKEN_TO_BE_REPLACED

END_OF_DOCUMENT_TOKEN_TO_BE_REPLACED

This feature require that you enable JavaScript in your browser.
END_OF_DOCUMENT_TOKEN_TO_BE_REPLACED