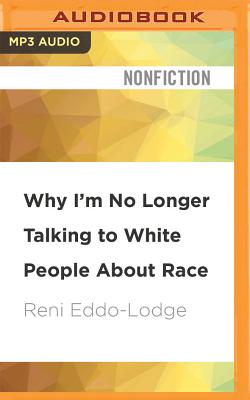 "I couldn't have a conversation with white folks about the details of a problem if they didn't want to recognise that the problem exists. Worse still was the white person who might be willing to entertain the possibility of said racism but still thinks we enter this conversation as equals. We didn't then, and we don't now."

In February 2014, Reni Eddo-Lodge posted an impassioned argument on her blog about her deep-seated frustration with the way discussions of race and racism in Britain were constantly being shut down by those who weren't affected by it. She gave the post the title 'Why I'm No Longer Talking to White People About Race'. Her sharp, fiercely intelligent words hit a nerve, and the post went viral, spawning a huge number of comments from people desperate to speak up about their own similar experiences.

Galvanised by this response, Eddo-Lodge decided to dive into the source of these feelings, this clear hunger for an open discussion. The result is a searing, illuminating, absolutely necessary exploration of what it is to be a person of colour in Britain today, covering issues from eradicated black history to white privilege, the fallacy of 'meritocracy' to whitewashing feminism, and the inextricable link between class and race. Full of passionate, personal and keenly felt argument, Why I'm No Longer Talking to White People About Race is a wake-up call to a nation in denial about the structural and institutional racism occurring in our homes.

This feature require that you enable JavaScript in your browser.
END_OF_DOCUMENT_TOKEN_TO_BE_REPLACED

END_OF_DOCUMENT_TOKEN_TO_BE_REPLACED

This feature require that you enable JavaScript in your browser.
END_OF_DOCUMENT_TOKEN_TO_BE_REPLACED