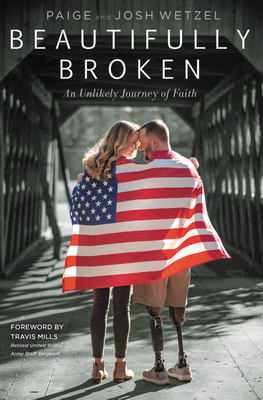 Restore your faith in love and family with one Army wife's courageous story of how she helped her husband recuperate from losing both of his legs while serving in Afghanistan.
Paige received the phone call that every military wife prays will never come. Her husband, Army Sergeant Josh Wetzel, stepped on an improvised explosive device while patrolling in Afghanistan. The blast resulted in the immediate loss of his legs. His survival was uncertain, and in the days to come, this traumatic incident began an unbelievable journey of faith for them as a couple.
Paige's vulnerability as she struggles physically, emotionally, and spiritually, will remind you of the power of commitment and love in the face of adversity. You will discover the bravery and grit of a woman who stood behind the battle lines but faced a battle of her own to save her marriage and her family. As a military wife, Paige had to come to terms with the priorities of the military: God, Country, and then Family.

Paige Wetzel is wife to double amputee Retired Army Sgt. Josh Wetzel and they have two beautiful daughters. Paige served as the Director of Volleyball Operations for Auburn University for four years where Josh is the Assistant Director of Digital Media. Between getting injured and March of 2014, Josh Wetzel was promoted to Sergeant, received the Purple Heart Award, and officially retired from the Army and began his civilian life with his family. The Wetzels remain active in the support of veterans, enjoy serving at their home church, Church of the Highlands, and promoting Auburn Athletics. The Wetzels live in Auburn, Alabama.

"Beautifully Broken is a must read not only for every American, but for every married couple! I came away with a deeper appreciation for the sacrifices of our military families, a deeper understanding of marriage relationships, and a deeper love for God and his goodness in the hardest of circumstances. Josh and Paige are real and raw and while we may never go through the things that they have experienced, the themes of every marriage are the same: sacrificial love, grace, forgiveness, perseverance and the work of choosing each other again and again. This is the hard work that pays off ultimately to a marriage that, while beautifully broken, is one that lasts."—Korie Robertson, -

Beautifully Broken is a unique and stunningly honest look into the lives of our wounded warriors and their loved ones. It is a story of the extreme challenges they face from the moment of impact on the battlefield, the journey home, and eventually to rebuilding their lives. What shines through this story is courage, love, and the indomitable human spirit. It is a beautifully written book.—Vicki Cody, an Army wife for 33 years and author of Army Wife: A Story of Love and Family in the Heart of the Army, -

Our world needs stories of hope and healing now more than ever, and Beautifully Broken reminds us that God's power is always at work in our lives. Authors Paige and Josh Wetzel are part of our church family so I know firsthand what they've endured and how God has healed them and restored their marriage. Now everyone can discover the inspiring, uplifting story of their faith journey, guided by God's love through some of life's darkest moments.—Chris Hodges, Senior Pastor, Church of the Highlands and Author of The Daniel Dilemma and What?s Next?, -

Most books are just words on pages. Beautifully Broken is much more than that. It's a story of love, faith, and heroic conduct unmatched in my view.
I may be biased. I met authors Josh and Paige Wetzel in 2013 as Josh was recovering from horrendous wounds sustained on the Afghan battlefield. I could not believe the strength of this couple.
What happened after Josh was wounded is related simply and emotionally in the book. After you read Beautifully Broken, you will never be the same.
—Bill O?Reilly, journalist, author, and former television host, -

The early morning phone call. The terrified visit to Walter Reed. The rehab and the tears and the struggles and the triumphs of spirit and love. With their new book Beautifully Broken, Paige and Army SGT Josh Wetzel have given a candid, heart-breaking, and ultimately life affirming gift to the rest of us. A must-read for the 99% of us who enjoy the freedoms the other 1% sacrifice so much to defend.—Jake Tapper, CNN Anchor and author of THE OUTPOST, -

I first met Paige and Josh while he was recovering at Walter Reed, shortly after he was injured in Afghanistan. Paige describes in beautiful prose the call no military spouse ever wants to receive: that her young Army specialist husband had had lost both of his legs following an IED explosion. The couple writes of their journey home: the fear, the ketamine hallucinations after surgery, the birth of their two daughters and how their faith carried them through their darkest days. The real test to their marriage came after they left Walter Reed. Paige knew she had married a soldier, but had no idea she had also married the US Army. A love story of faith and resilience.
—Jennifer Griffin, National Security Correspondent Fox News, -

I'm honored that my photograph of President Obama visiting Josh in the hospital has played a very small, but poignant moment of his amazing story.
—Pete Souza, former chief official White House photographer, -

This feature require that you enable JavaScript in your browser.
END_OF_DOCUMENT_TOKEN_TO_BE_REPLACED

END_OF_DOCUMENT_TOKEN_TO_BE_REPLACED

This feature require that you enable JavaScript in your browser.
END_OF_DOCUMENT_TOKEN_TO_BE_REPLACED