The Knock at the Door: Three Gold Star Families Bonded by Grief and Purpose (Hardcover) 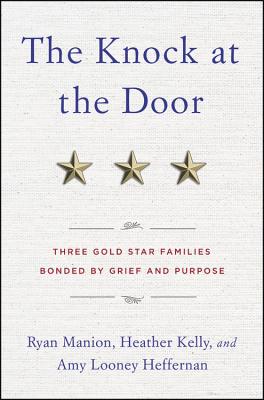 Three Gold Star women, linked forever by unimaginable loss, share their inspiring, unlikely journey that began on the worst day of their lives.
What happens when tragedy knocks on your front door?
For us, it was a literal knock, with two men standing in crisply pressed uniforms. They had news. News that gutted us to the core -- the death of our loved ones, a brother and two husbands -- in combat zones. The thing about those moments is that it's almost inconceivable that they can happen to you. That is, until they do.
This book is for anyone who has ever received a knock at the door. And if you live long enough and have the courage to love others, you will. Maybe it's a cancer diagnosis. Maybe it's the death of your best friend. The betrayal of a spouse. The loss of a child. The implosion of a professional career. Or any tragedy that takes the person we love the most away from us too soon. Life is not without its challenges. The key is how you respond.
This is our story. The story of three women, bonded by grief and purpose. Grief because we lost our best friends in war. Purpose because we resolved -- together -- to do something about it. To turn loss into inspiration for others and to channel the love that we had for the men in our lives into love for others through service. It was the only way we could escape the trap of despair and inaction, and we believe it offers a roadmap for anyone else who has ever had to answer a knock at the door.

Ryan Manion is the surviving sister of Marine 1stLt Travis Manion, who was killed in Iraq on April 29, 2007. His death served as the inspiration for establishing the Travis Manion Foundation, a nationally recognized veteran service organization. Today Ryan leads the foundation as President, and as a highly regarded advocate for the military community, she addresses national audiences frequently.
Amy Looney Heffernan is the surviving spouse of LT Brendan Looney, a West Coast-based Navy SEAL who was killed in Afghanistan on September 21, 2010. Brendan was also the best friend and Naval Academy roommate of Travis Manion. Amy has a Masters in Public Administration and serves as the Vice-President of the Travis Manion Foundation.
Heather Kelly is the surviving spouse of Marine 1st Lt Robert Kelly, who was killed in Afghanistan on November 9, 2010. Serving as the West Region Program Manager for Travis Manion Foundation, Heather works closely with veterans returning to civilian life, the surviving family members of those who make the ultimate sacrifice, and fostering America's next generation of leaders.

This feature require that you enable JavaScript in your browser.
END_OF_DOCUMENT_TOKEN_TO_BE_REPLACED

END_OF_DOCUMENT_TOKEN_TO_BE_REPLACED

This feature require that you enable JavaScript in your browser.
END_OF_DOCUMENT_TOKEN_TO_BE_REPLACED