Around the World in a Dugout Canoe: The Untold Story of Captain John Voss and the Tilikum (Hardcover) 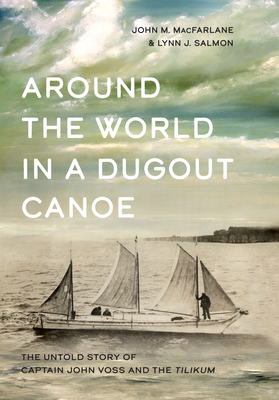 The true story of the Tilikum and her captain, for fans of maritime history and tales of adventure on the high seas

Anticipating fame and wealth, Captain John Voss set out from Victoria, BC, in 1901, seeking to claim the world record for the smallest vessel ever to circumnavigate the globe. For the journey, he procured an authentic dugout cedar canoe from an Indigenous village on the east coast of Vancouver Island.

For three years Voss and the Tilikum, aided by a rotating cast of characters, visited Australia, New Zealand, South Africa, Brazil and finally England, weathering heavy gales at sea and attracting large crowds of spectators on shore. The austere on-board conditions and simple navigational equipment Voss used throughout the voyage are a testimony to his skill and to the solid construction of the Nuu-Chah-Nulth vessel.

Both Voss and his original mate, newspaperman N.K. Luxton, later wrote about their journey in accounts compromised by poor memories, brazen egos and outright lies. Stories of murder, cannibalism and high-seas terror have been repeated elsewhere without any regard to the truth. Now, over a century later, a full and fair account of the voyage--and the magnitude of Voss's accomplishment--is at last fully detailed.

In this groundbreaking work, marine historians John MacFarlane and Lynn Salmon sift fact from fiction, critically examining the claims of Voss's and Luxton's manuscripts against research from libraries, archives, museums and primary sources around the world. Including unpublished photographs, letters and ephemera from the voyage, Around the World in a Dugout Canoe tells the real story of a little-understood character and his cedar canoe. It is an enduring story of courage, adventure, sheer luck and at times tragedy.

This feature require that you enable JavaScript in your browser.
END_OF_DOCUMENT_TOKEN_TO_BE_REPLACED

END_OF_DOCUMENT_TOKEN_TO_BE_REPLACED

This feature require that you enable JavaScript in your browser.
END_OF_DOCUMENT_TOKEN_TO_BE_REPLACED