Gold!: The Story of the 1848 Gold Rush and How It Shaped a Nation (Hardcover) 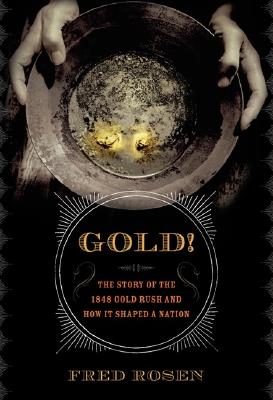 There isn't an American alive today who hasn't been affected by what happened at Sutter's Fort east of Sacramento on January 24, 1848. Carpenter James Marshall was building a sawmill when he accidentally discovered a pea-shaped nugget of gold in a ditch. Just like that, the American character changed, and the gold rush became the focal point of mid-nineteenth-century America. From 1848 to 1850, ninety thousand people trekked across the continent when California was still a vast wilderness. By 1854, that figure had risen to three hundred thousand. Representing every ethnic group, a substantial fraction of the American population migrated to California's gold fields in six years. The mortality rate in the gold camps was over 25 percent. There was no law, only vice. And despite that, the fortune hunters knew that the gold rush afforded them a once-in-a-lifetime opportunity to rocket to the top of the economic and social ladder. The gold rush marked the moment when people stopped believing that good work leads to a good life, which then leads to a good afterlife. They started believing, instead, that anyone could make it rich. Americans thus began their phantom pursuit of wealth that continues to this day.

This feature require that you enable JavaScript in your browser.
END_OF_DOCUMENT_TOKEN_TO_BE_REPLACED

END_OF_DOCUMENT_TOKEN_TO_BE_REPLACED

This feature require that you enable JavaScript in your browser.
END_OF_DOCUMENT_TOKEN_TO_BE_REPLACED