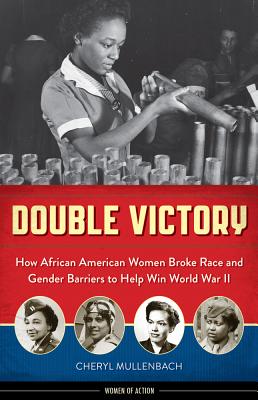 This is book number 2 in the Women of Action series.

“Allow all black nurses to enlist, and the draft won’t be necessary. . . . If nurses are needed so desperately, why isn’t the Army using colored nurses?”

“My arm gets a little sore slinging a shovel or a pick, but then I forget about it when I think about all those boys over in the Solomons.”

Double Victory tells the stories of African American women who did extraordinary things to help their country during World War II. In these pages young readers meet a range of remarkable women: war workers, political activists, military women, volunteers, and entertainers. Some, such as Mary McLeod Bethune and Lena Horne, were celebrated in their lifetimes and are well known today. But many others fought discrimination at home and abroad in order to contribute to the war effort yet were overlooked during those years and forgotten by later generations. Double Victory recovers the stories of these courageous women, such as Hazel Dixon Payne, the only woman to serve on the remote Alaska-Canadian Highway; Deverne Calloway, a Red Cross worker who led a protest at an army base in India; and Betty Murphy Phillips, the only black female overseas war correspondent. Offering a new and diverse perspective on the war and including source notes and a bibliography, Double Victory is an invaluable addition to any student’s or history buff’s bookshelf.

Cheryl Mullenbach is a former history teacher, librarian, and public television project manager and is currently a K–12 social studies consultant. She contributed several entries to Women in American Military History: An Encyclopedia.

“Double Victory is a treasure trove of little-known African American history. Cheryl Mullenbach reveals the stories our parents and grandparents were too humble to tell. Read this book and, no matter how much you think you know, you will learn something new.”  —Sherri L. Smith, author, Flygirl

“Cheryl Mullenbach has done a great service in telling the stories of these determined black women who fought racial injustice two decades before the civil rights movement in order to win the right to fight fascism alongside their fellow Americans. Double Victory is at once heartbreaking and inspiring.” —Kathryn Atwood, author of Women Heroes of Word War II

“Double Victory . . . spotlights the history of ordinary women who stepped up, spoke out, and defied the rules. These unforgettable African American women denied the America they had in favor of the America in which they hoped to live—and paved the way for the women who continue to create the America we have today.”  —Tanita S. Davis, author, Mare’s War

“This is an excellent title for expanding students’ view of the Civil Rights Movement.”—School Library Journal

“Archival photographs throughout the entire book add to the value of this book, which is indeed, a Double Victory in many ways and a new and valuable addition to women’s history, especially African American women.”—Reading.org

“A must read for anyone interested in WWII, Women's History, or African American History…an excellent resource for teachers who are interested in showing a different side of the war or the early Civil Rights Movement.” —Reading Lark

This feature require that you enable JavaScript in your browser.
END_OF_DOCUMENT_TOKEN_TO_BE_REPLACED

END_OF_DOCUMENT_TOKEN_TO_BE_REPLACED

This feature require that you enable JavaScript in your browser.
END_OF_DOCUMENT_TOKEN_TO_BE_REPLACED