The Collector: David Douglas and the Natural History of the Northwest (Hardcover) 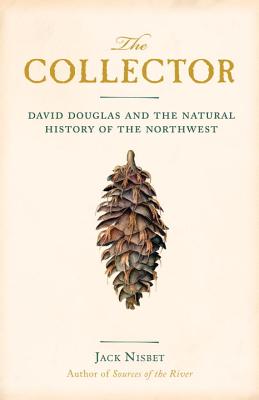 Jack Nisbet first told the story of British explorer David Thompson, who mapped the Columbia River, in his acclaimed book Sources of the River, which set the standard for research and narrative biography for the region. Now Nisbet turns his attention to David Douglas, the premier botanical explorer in the Pacific Northwest and throughout other areas of western North America. Douglas's discoveries include hundreds of western plants--most notably the Douglas Fir. The Collector tracks Douglas's fascinating history, from his humble birth in Scotland in 1799 to his botanical training under the famed William Jackson Hooker, and details his adventures in North America discovering exotic new plants for the English and European market. The book takes readers along on Douglas's journeys into a literal brave new world of then-obscure realms from Puget Sound to the Sandwich Islands. In telling Douglas's story, Nisbet evokes a lost world of early exploration, pristine nature, ambition, and cultural and class conflict with surprisingly modern resonances.

Jack Nisbet is a historian, teacher, and author focusing on the intersection of human history and natural history in the Pacific Northwest. His "Sources of the River" won the Murray Morgan Prize from the Washington State Historical Society.

"The Collector shows Nisbet to be a master of the journals, letters, and contemporary accounts of David Douglas. He knows the juiciest quotes and employs them judiciously..."
Books & Culture

"Nisbet’s well-researched narrative has considerable bounce and drama... It’s a portrait of a true adventurer…a solid piece of scholarship and synthesis.”
Kirkus Reviews

"As Nisbet did in his previous books about natural history and history — "Sources of the River" and "Visible Bones" — he has seamlessly woven journal entries, historical documents and modern reporting to re-create the life of one of the greatest explorers of our region...Nisbet has done a first-rate job of re-creating not only Douglas' life and expeditions but also his passion for knowledge, exploration and discovery."
The Seattle Times

"... Douglas still casts a long shadow over the Pacific Northwest, and Jack Nisbet has, as usual, filled in the details beautifully."
The Inlander

"Historian and naturalist Nisbet traces the unlikely evolution of this audacious adventurer (David Douglas) from his early days as an apprentice gardener in his native Britain to the rough-and-tumble years spent traversing the daunting terrain of the Pacific Northwest and beyond... The result is an exhilarating biography that provides an entertaining portrait of the unfettered determination that drove one of the giants in the field of botanical exploration and infused the young nation he viewed with a keen and zealous spirit."
Booklist

“Nisbet gracefully and concisely traces Douglas’ journey from a gardener’s apprentice in Scotland to a young botanist-collector.”
The Spokesman Review

"'The Collector' a biography of David Douglas and the natural history of the Northwest by Jack Nisbet is worth the time it will take to read it. ...Nisbet is a writer, teacher and naturalist himself and his telling of the life of David Douglas will awaken wonder in those who read it."
Kitsap Sun

"Although not the first book to detail Douglas’s life, Nisbet’s travelogue both provokes and satisfies readers, like me, who envy the botanist for his wilderness adventures long before the age of road building."
Natural History Magazine

This feature require that you enable JavaScript in your browser.
END_OF_DOCUMENT_TOKEN_TO_BE_REPLACED

END_OF_DOCUMENT_TOKEN_TO_BE_REPLACED

This feature require that you enable JavaScript in your browser.
END_OF_DOCUMENT_TOKEN_TO_BE_REPLACED