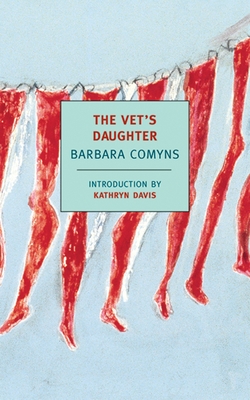 The Vet's Daughter combines shocking realism with a visionary edge. The vet lives with his bedridden wife and shy daughter Alice in a sinister London suburb. He works constantly, captive to a strange private fury, and treats his family with brutality and contempt. After his wife's death, the vet takes up with a crass, needling woman who tries to refashion Alice in her own image. And yet as Alice retreats ever deeper into a dream world, she discovers an extraordinary secret power of her own.

Harrowing and haunting, like an unexpected cross between Flannery O'Connor and Stephen King, The Vet's Daughter is a story of outraged innocence that culminates in a scene of appalling triumph.

Barbara Comyns (1909–1992) was born in Bidford-on-Avon, in the English county of Warwickshire, one of six children of an increasingly unsuccessful Birmingham brewer. Living on the run-down but romantic family estate and receiving her education from governesses, she began to write and illustrate stories at the age of ten. After her father’s death, she attended art school in London and married a painter, with whom she had two children she supported by trading antiques and classic cars, modeling, breeding poodles, and renovating apartments. A second marriage, to Richard Comyns Carr, who worked in the Foreign Office, took place during World War II. Comyns wrote her first book, Sisters by the River (1947), a series of sketches based on her childhood, while living in the country to escape the Blitz, which is also when she made an initial sketch for The Vet’s Daughter. This, however, she put aside to complete Our Spoons Came from Woolworths (1950), about her first marriage, and Who was Changed and Who was Dead (1955). The Vet’s Daughter was published in 1959. Among Barbara Comyns’s other books are the novels The Skin Chairs (1962) and The Juniper Tree (1985), and Out of the Blue into the Red (1960), a work of nonfiction about Spain, where she lived for eighteen years.

“Comyns's world is weird and wonderful. Tragic, comic and completely bonkers all in one, I'd go as far as to call her something of a neglected genius.” —Lucy Scholes, The Guardian


"I’d like also to recommend The Vet’s Daughter by Barbara Comyns, which hit me like a dangerous drug earlier this year: one of the best books I’ve ever read." --Wesley Stace, The Believer