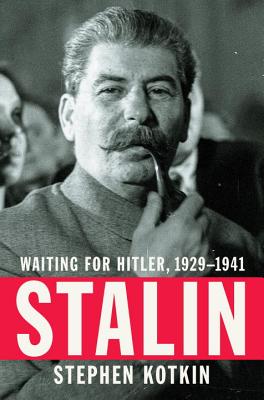 Pulitzer Prize-finalist Stephen Kotkin has written the definitive biography of Joseph Stalin, from collectivization and the Great Terror to the conflict with Hitler's Germany that is the signal event of modern world history

In 1929, Joseph Stalin, having already achieved dictatorial power over the vast Soviet Empire, formally ordered the systematic conversion of the world’s largest peasant economy into “socialist modernity,” otherwise known as collectivization, regardless of the cost.

What it cost, and what Stalin ruthlessly enacted, transformed the country and its ruler in profound and enduring ways. Building and running a dictatorship, with life and death power over hundreds of millions, made Stalin into the uncanny figure he became. Stephen Kotkin’s Stalin: Waiting for Hitler, 1929–1941 is the story of how a political system forged an unparalleled personality and vice versa.

The wholesale collectivization of some 120 million peasants necessitated levels of coercion that were extreme even for Russia, and the resulting mass starvation elicited criticism inside the party even from those Communists committed to the eradication of capitalism. But Stalin did not flinch. By 1934, when the Soviet Union had stabilized and socialism had been implanted in the countryside, praise for his stunning anti-capitalist success came from all quarters. Stalin, however, never forgave and never forgot, with shocking consequences as he strove to consolidate the state with a brand new elite of young strivers like himself. Stalin’s obsessions drove him to execute nearly a million people, including the military leadership, diplomatic and intelligence officials, and innumerable leading lights in culture.

While Stalin revived a great power, building a formidable industrialized military, the Soviet Union was effectively alone and surrounded by perceived enemies. The quest for security would bring Soviet Communism to a shocking and improbable pact with Nazi Germany. But that bargain would not unfold as envisioned. The lives of Stalin and Hitler, and the fates of their respective dictatorships, drew ever closer to collision, as the world hung in the balance.

Stalin: Waiting for Hitler, 1929–1941 is a history of the world during the build-up to its most fateful hour, from the vantage point of Stalin’s seat of power. It is a landmark achievement in the annals of historical scholarship, and in the art of biography.

Stephen Kotkin is the John P. Birkelund Professor in History and International Affairs at Princeton University. He is also a fellow at the Hoover Institution at Stanford University. He directs Princeton's Institute for International and Regional Studies and co-directs its Program in the History and Practice of Diplomacy. His books include Uncivil Society, Armageddon Averted, and Magnetic Mountain. Kotkin was a Pultizer Prize finalist for Stalin: Volume I: Paradoxes of Power, 1878-1928.

Winner of the Mark Lynton History Prize, 2018
A Sunday Times (London) History Book of the Year 2017
One of Kirkus Reviews' Best Biographies of 2017

“Monumental . . . Drawing on an astonishing array of sources, Kotkin paints a richly variegated portrait, delving into Stalin’s peculiar personality even while situating him within the trajectories of Soviet history and totalitarianism more generally. . . Kotkin teases out his subject’s contradictions, revealing Stalin as both ideologue and opportunist, man of iron will and creature of the Soviet system, creep who apparently drove his wife to suicide and leader who inspired his people. . . will surely stand for years to come as a seminal account of some of the most devastating events of the 20th century.” —The New York Times Book Review

“The book makes it mark through its theoretical sophistication, relentless argumentation, and sheer Stakhoanovite immensity. . . Kotkin also attempts to answer the chief philosophical question about Stalin: whether the monstrous regime he created was a function of his personality or of something inherent in Bolshevism.” —Keith Gessen, The New Yorker

“A masterpiece, surely one of the most remarkable books on 20th-century history to have been published in many years. It is not only the depth of research that takes the breath away; it is the scale and range of Kotkin’s framing of his subject and the acuity of his observations.”  —Mark Mazower, The Guardian

“A stunning achievement . . . In a landmark work of historical scholarship, Kotkinhas written a captivating biography of a despot that chronicles the evolutionof Stalin as a human being, political operator, and growing archfiend in this horrificera of modern history.” —Jurors of the Mark Lynton History Prize, 2018

“Kotkin delivers more than a detailed and revealing biography. His academic precision and narrative power illuminates Stalin’s personal journey with an exactness that stays with the reader long after the book is finished. . . . Kotkin brings a refreshing objectivity to one of the most complex figures in recent world history.” —Former Senator Jim Webb

“[T]he second volume of what will surely rank as one of the greatest historical achievements of our age . . . few other biographies have so succeeded in showing how one man shaped his times, and how his times shaped him. This is a book not just about Stalin but about the entire spectrum of world affairs in the 1930s, its focus constantly shifting from the tiniest personal details to the grand sweep of international strategy. Kotkin’s project is the War and Peace of history: a book you fear you will never finish, but just cannot put down. The ending is perfectly judged. It is the night of Saturday, June 21, 1941. In his office, Stalin paces nervously, waiting for news. And on the border, Hitler’s war machine prepares to strike.” —The Times (London)

“There have been many other biographies of Stalin, but none matches the range of information and analysis that animates Mr. Kotkin’s ambitious project.  Waiting for Hitler is biography and history on a grand scale – equal in scope to the enormity of the events it describes.” —Joshua Rubenstein, The Wall Street Journal

“It is the most gripping of reads, packed with epoch-shaking events and human tragedy. This volume sweeps through the collectivisation of agriculture and the mass famine of the early 1930s, the Great Terror of 1936-38, the outbreak of the second world war, the disastrous winter war against Finland, and the macabre diplomatic dance between Stalin and Hitler ahead of the Nazi invasion of June 1941. This is, as close as it is possible to imagine, the definitive biography of Stalin.” —Financial Times

“A triumph, necessary reading for anyone hoping to make sense of Stalin and the Soviet Union.” —New Criterion

“Kotkin, a Princeton history professor, has performed prodigies of research, wading through masses of previously inaccessible Soviet-era documents to produce what is surely the definitive portrait.” —American Conservative

“It is unlikely we will soon have a biography the equal of Kotkin’s… We turn to a biography of this heft for the larger history, and for detailed analyses of that history, and Kotkin doesn’t disappoint… Thrilling and engrossing.” —Jewish Currents

“Against all odds considering their grim topics, these Stalin volumes from Kotkin, in addition to being definitive, are the kind of infectiously entertaining that only comes from perfect match of topic and storyteller.”  —Open Letters Monthly

“A magisterial second entry in this multivolume biography. He integrates a massive body of newly available documents with extant scholarship, comprehensively detailing the development of the U.S.S.R. and the nature of Stalin’s rule. . . Kotkin’s account is a hefty challenge, but an eminently worthwhile one.” —Publishers Weekly, starred review

“A well-written, finely detailed installment in a definitive biography—sure to receive many prize nominations this year.” —Kirkus, starred review

This feature require that you enable JavaScript in your browser.
END_OF_DOCUMENT_TOKEN_TO_BE_REPLACED

END_OF_DOCUMENT_TOKEN_TO_BE_REPLACED

This feature require that you enable JavaScript in your browser.
END_OF_DOCUMENT_TOKEN_TO_BE_REPLACED