The Dreamer Volume 1: The Consequence of Nathan Hale (Paperback) 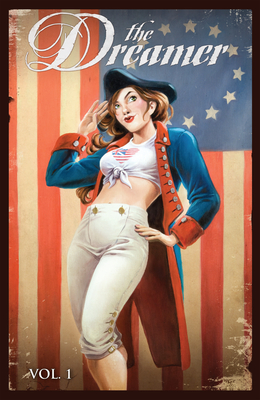 Creator Lora Innes writes and illustrates the tale of 17-year-old Beatrice "Bea" Whaley, a student who begins having vivid dreams about a brave and handsome soldier named Alan Warren… a member of an elite group known as Knowlton’s Rangers that fought during the Revolutionary War. Prone to keeping her head in the clouds, Bea welcomes her nightly adventures in 1776; filled with danger and romance they give her much to muse about the next day. But it is not long before Beatrice questions whether her dreams are simply dreams or something more…

Lora Innes is the creator of The Dreamer webcomic, a historical fantasy about a high-schooler named Bea Whaley who begins having dreams about the American Revolutionary War. Every night her dream picks up right where it left off, and soon Bea questions if these are just dreams… or if they’re something more. Full of adventure, romance, and war, The Dreamer has grown a cult following online. IDW Publishing has released three graphic novel collections of The Dreamer, which have been nominated five times in the Harvey Awards. She appeared on AHC’s The American Revolution, a three-part miniseries by Discovery Communications, talking about lesser known heroes and heroines of America's War for Independence. Most recently, Lora was the series artist on IDW Publishing’s Wynonna Earp comic book adaptation of Syfy’s television show of the same name. She remains a part of the creative team as a cover artist.

“From the very first frame of The Dreamer, it is easy and an utter joy to be swept away by the power of Lora’s incredible artwork. Each panel is a feast for the eyes, imagination, and the heart. That this beautiful work is paired to a pitch-perfect story at once epic and intimate, both serious and playful, that straddles a teenage present and our nation’s most dramatic past is a testament to a creativity that knows no bounds. Impossible to put down, The Dreamer is for today what Johnny Tremain has been for generations; Ms. Innes stands beside Esther Forbes as her equal in bringing to life a story of the American Revolution that is an emotional journey through an illumination of the true history of the Birth of Freedom.” —Michael Frost Beckner, Spy Game

This feature require that you enable JavaScript in your browser.
END_OF_DOCUMENT_TOKEN_TO_BE_REPLACED

END_OF_DOCUMENT_TOKEN_TO_BE_REPLACED

This feature require that you enable JavaScript in your browser.
END_OF_DOCUMENT_TOKEN_TO_BE_REPLACED