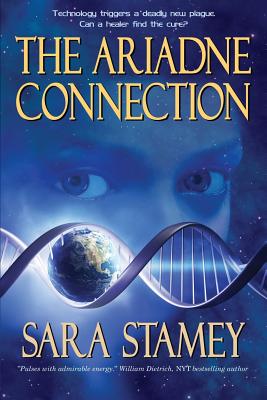 The New Leprosy plague and a geomagnetic reversal threaten the world's precarious balance. When jaded American expat Peter Mitchell agrees to transport mysterious Ariadne Demodakis to sacred sites in the Greek islands, the sailor convinces himself it's just another "freelance import" job. But when his passenger is pursued by the terrorist Sons of the Prophet, mercenaries, and a cult of warrior women, Peter realizes there's more to the young bioelectricity researcher than he first believed. Then paparazza Leeza Conreid blackmails her way onto the boat, intent on sabotage, and Peter nearly walks away from the deal. Ariadne seeks to confirm a connection between the pandemic, geologic upheavals, and ancient lore that promises healing for humans and the planet. Peter will need all his wits and weapons to protect Ariadne as she labors to control her connection to the dangerous forces that may deliver a global cure. Or destroy them all.

"The Ariadne Connection takes the reader on a visual feast through the azure waters and rugged Mediterranean landscapes of the Greek Islands while tapping into the deep roots of mythological tradition.... A rocket-paced thrill ride that delivers complex, engaging characters in a laser-sharp plot." -Chanticleer Reviews

"Draws connections between humanity's moral compass and the well-being of the planet we live on." -The Bookmonger Review