The Freemasons: A History of the World's Most Powerful Secret Society (Paperback) 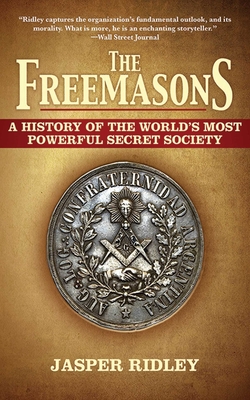 What did Mozart and Bach, Oscar Wilde and Anthony Trollope, George Washington and Frederick the Great, Winston Churchill and Franklin D. Roosevelt have in common? They were all Freemasons, a secret society that has been the subject of endless fascination.

“Ridley captures the organization’s fundamental outlook, and its morality. What is more, he is an enchanting storyteller.”—The Wall Street Journal

To the layman, they are a mysterious brotherhood of profound if uncertain influence, a secret society purported in some popular histories to have its roots in the fabled order of the Knights Templar, or in the mysteries of the Egyptian pyramids. They evoke fears of world domination by a select few who enjoy privileged access to wealth and the levers of power. The secrecy of their rites suggests the taint of sacrilege, and their hidden loyalties are sometimes accused of undermining the workings of justice and the integrity of nations. Chapters here include:

Though not a mason himself, Jasper Ridley nonetheless refutes many of the outrageous allegations made against Freemasonry, while at the same time acknowledging the masons’ shortcomings: their clannishness, misogyny, obsession with secrecy, and devotion to arcane ritual. In this much-needed reassessment, he offers a substantial work of history that sifts the truth from the myth as it traces Freemasonry from its origins to the present day.

This feature require that you enable JavaScript in your browser.
END_OF_DOCUMENT_TOKEN_TO_BE_REPLACED

END_OF_DOCUMENT_TOKEN_TO_BE_REPLACED

This feature require that you enable JavaScript in your browser.
END_OF_DOCUMENT_TOKEN_TO_BE_REPLACED