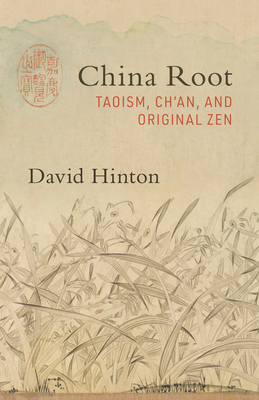 A beautifully compelling and liberating guide to the original nature of Zen in ancient China by renowned author and translator David Hinton.

Buddhism migrated from India to China in the first century C.E., and Ch'an (Japanese: Zen) is generally seen as China's most distinctive and enduring form of Buddhism. In China Root, however, David Hinton shows how Ch'an was in fact a Buddhist-influenced extension of Taoism, China's native system of spiritual philosophy. Unlike Indian Buddhism's abstract sensibility, Ch'an was grounded in an earthy and empirically-based vision. Exploring this vision, Hinton describes Ch'an as a kind of anti-Buddhism. A radical and wild practice aspiring to a deeply ecological liberation: the integration of individual consciousness with landscape and with a Cosmos seen as harmonious and alive.

In China Root, Hinton describes this original form of Zen with his trademark clarity and elegance, each chapter exploring in enlightening ways a core Ch'an concept--such as meditation, mind, Buddha, awakening--as it was originally understood and practiced in ancient China. Finally, by examining a range of standard translations in the Appendix, Hinton reveals how this original understanding and practice of Ch'an/Zen is almost entirely missing in contemporary American Zen, because it was lost in Ch'an's migration from China through Japan and on to the West.

Whether you practice Zen or not, taking this journey on the wings of Hinton's remarkable insight and powerful writing will transform how you understand yourself and the world.

DAVID HINTON's many translations of ancient Chinese poetry and philosophy have earned wide acclaim for creating compelling contemporary works that convey the actual texture and density of the originals. The author of countless books of essays and poetry, Hinton has been awarded a Guggenheim Fellowship, numerous fellowships from the N.E.A. and the N.E.H, the Landon Translation Award, the PEN American Translation Award, and a lifetime achievement award by The American Academy of Arts and Letters.

“China Root is an utterly engrossing account of the deepest treasures the Zen/Ch’an path can open up, as it leads us into the manifest-yet-hidden wonders of who we really are. Hinton writes as very few can, not only as a scholar, practitioner, and translator but also as a poet—something the old artist-intellectuals of China would surely have appreciated. His deep understanding of the Taoist roots of Ch’an shine a light on the Zen practice of today, taking us back in a thrilling way beyond the Japanese rigor and aesthetics, beyond the mythical T’ang Dynasty flourishing of Ch’an’s great ancestors, back to its Taoist roots in the first millennium BCE—and even beyond them, into the mists of its paleolithic origins. It is here, back in its true roots—which also happen to be the deepest aspects of our life—that Hinton beautifully makes clear our participation in a generative cosmos, a constantly manifesting, burgeoning Presence, even while it never ceases to be a primordial Absence.

Oddly perhaps, in spite of Hinton’s expert parsing out of missteps in the translation and transmission of this Dharma to the West, I can’t help feeling I’ve just read a staggeringly good account of the modern Zen training a contemporary Japanese-based lineage led me through. Be that as it may, this thoroughly gripping book pulls together various threads of David Hinton’s prior work into one powerful, concise masterwork. May it echo through modern zendos for decades to come.”—Henry Shukman Roshi, author of One Blade of Grass: A Zen Memoir

“In China Root, David Hinton presents an inspiring vision of Chan in close relation to its original Daoist roots, guiding us to recalibrate Buddhist thinking into more concrete, dynamic, earthy dimensions and to engage in a simpler yet even more immediate connection with the never-ceasing flow of life's potency.”—Lion's Roar

This feature require that you enable JavaScript in your browser.
END_OF_DOCUMENT_TOKEN_TO_BE_REPLACED

END_OF_DOCUMENT_TOKEN_TO_BE_REPLACED

This feature require that you enable JavaScript in your browser.
END_OF_DOCUMENT_TOKEN_TO_BE_REPLACED