The Case of the Careless Kitten: A Perry Mason Mystery (Paperback) 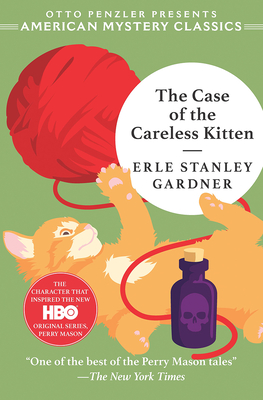 Perry Mason, the character that inspired the new HBO limited series, seeks the link between a poisoned kitten, a murdered man, and a mysterious voice from the past

Helen Kendal's woes begin when she receives a phone call from her vanished uncle Franklin, long presumed dead, who urges her to make contact with criminal defense attorney Perry Mason; soon after, she finds herself the main suspect in the murder of an unfamiliar man. Her kitten has just survived a poisoning attempt, as has her aunt Matilda, the woman who always maintained that Franklin was alive in spite of his disappearance.

Lucky that Helen took her uncle's advice and contacted Perry Mason—he immediately takes her as a client. But while it’s clear that all the occurrences are connected, and that their connection will prove her innocence, the links in the case are too obscure to be recognized even by the attorney’s brilliantly deductive mind. Risking disbarment for his unorthodox methods, he endeavors to outwit the police and solve the puzzle himself, enlisting the help of his secretary Della Street, his private eye Paul Drake, and the unlikely but invaluable aid of a careless but very clever kitten in the process.

Reprinted for the first time in over twenty years, The Case of the Careless Kitten is one of the most highly praised cases in the iconic Perry Mason series, which need not be read in any particular order.

Erle Stanley Gardner (1889-1970) was the best-selling American author of the 20th century, mainly due to the enormous success of his Perry Mason series, which numbered more than 80 novels and inspired a half-dozen motion pictures, radio programs, and a long-running television series that starred Raymond Burr. Having begun his career as a pulp writer, Gardner brought a hard-boiled style and sensibility to the early Mason books, but gradually developed into a more classic detective story novelist, showing enough clues to allow the astute reader to solve the mystery. For more than a quarter of a century he wrote more than a million words a year under his own name and numerous pseudonyms, the most famous being A.A. Fair.

Otto Penzler, the creator of American Mystery Classics, is also the founder of the Mysterious Press (1975); Mysterious Press.com (2011), an electronic-book publishing company; and New York City’s Mysterious Bookshop (1979). He has won a Raven, the Ellery Queen Award, two Edgars (for the Encyclopedia of Mystery and Detection, 1977, and The Lineup, 2010), and lifetime achievement awards from Noircon and The Strand Magazine. He has edited more than 70 anthologies and written extensively about mystery fiction.

This reissue in the American Mystery Classics series will appeal to a new generation of readers.
— Publishers Weekly

With Perry Mason, Erle Stanley Gardner introduced to American letters the notion of the lawyer as a hero—and detective—which were remarkable innovations. He even gave defense lawyers a good name to boot. His Mason books remain tantalizing on every page and brilliant.
— Scott Turow, author of Presumed Innocent and Testimony

No one has ever matched Gardner for swift, sure exposition, and this vintage case shows America's lawyer taking on a delightfully unexpected role.
— Kirkus

One of the best of the Perry Mason tales.
— The New York Times

Gardner has a way of moving the story forward that is almost a lost art: great stretches of dialogue alternate with lively chunks of exposition, and the two work together perfectly, without sacrificing momentum.
— Booklist

This feature require that you enable JavaScript in your browser.
END_OF_DOCUMENT_TOKEN_TO_BE_REPLACED

END_OF_DOCUMENT_TOKEN_TO_BE_REPLACED

This feature require that you enable JavaScript in your browser.
END_OF_DOCUMENT_TOKEN_TO_BE_REPLACED