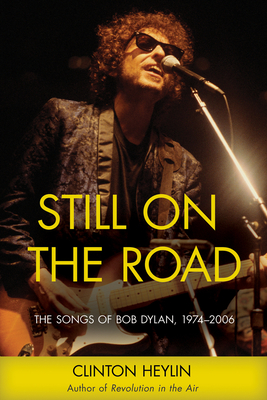 The second of two volumes, this companion to every song that Bob Dylan ever wrote is the most comprehensive book on the words of America’s greatest songwriter. Clinton Heylin is the world’s leading Dylan biographer and expert, and he has arranged the songs—including a number that have never been performed—in a continually surprising chronology of when they were actually written rather than when they appeared on albums. Using newly discovered manuscripts, anecdotal evidence, and a seemingly limitless knowledge of every Bob Dylan live performance, he has uncovered a wealth of information, leaving no stone unturned in his research.

Clinton Heylin is the author of several books, including Bob Dylan: Behind the Shades, Bob Dylan: The Recording Sessions, Can You Feel the Silence: Van Morrison, and Revolution in the Air: The Songs of Bob Dylan, 1957–1973.

"Clinton Heylin, master explicator of the Dylan canon, has however improbably, sorted it all out for us through the tangled '80's and beyond, completing what he started in Revolution In The Air. The book is essential." —Jonathan Lethem

"Heylin is at once a researcher, explicator and archivist . . . Taking Dylan's songs in sequential order of composition might seem to be an improbable project, but Heylin documents it with such attention to detail that one marvels at his provable and entirely correct timeline." —Shepherd Express

This feature require that you enable JavaScript in your browser.
END_OF_DOCUMENT_TOKEN_TO_BE_REPLACED

END_OF_DOCUMENT_TOKEN_TO_BE_REPLACED

This feature require that you enable JavaScript in your browser.
END_OF_DOCUMENT_TOKEN_TO_BE_REPLACED