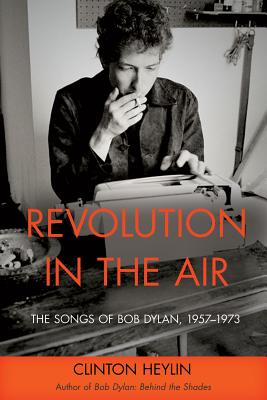 By far the most comprehensive book on Bob Dylan’s words ever written, including a number of songs that no one has ever heard, this first volume will fundamentally change how his lyrics are interpreted and understood. Arranged in a surprising chronology of when they were actually written rather than when they appeared on albums—the middle verse of “Blowin’ in the Wind” was written much later than the first and third verses, and the songs on John Wesley Harding were written prior to some of the songs on The Basement Tapes—hundreds of surprising facts are uncovered in this catalog of 300 songs, spanning his career prior to Blood on the Tracks. Newly discovered manuscripts, anecdotal evidence, and a seemingly limitless knowledge of every Dylan live performance contribute to this definitive resource of the words of a celebrated American singer-songwriter.

Clinton Heylin is the author of Bob Dylan: Behind the Shades, Bob Dylan: The Recording Sessions, From the Velvets to the Voidoids: The Birth of American Punk, Still on the Road, and several other books.

"An authoritative history of the singer-songwriter’s canon. . . . Sprinkled with Dylan quotes, the entries are thorough, informative, and engaging. Taken together, they provide a fascinating glimpse into the creative process of this enigmatic genius of American song."  —Choice

"An excellent supplement to a good Dylan biography."  —Arkansas Democrat-Gazette

"A must for any serious Dylan freak."  —Relix

"One of the most important volumes in the already-groaning Bookshelf of Bob."  —Houston Press

"In Revolution in the Air Clinton Heylin has pored over Bob Dylan's songs--all of them--and has drawn conclusions, not on a wall, but in the first of a two-part magnum opus that anyone curious about, fascinated by, and devoted to His Master's Voice will want to read and ponder."  —Jonathan Cott, author of Dylan and editor of Bob Dylan: The Essential Interviews

"Clinton Heylin [is] the Dylanologist actually worth reading."  —The New York Times

This feature require that you enable JavaScript in your browser.
END_OF_DOCUMENT_TOKEN_TO_BE_REPLACED

END_OF_DOCUMENT_TOKEN_TO_BE_REPLACED

This feature require that you enable JavaScript in your browser.
END_OF_DOCUMENT_TOKEN_TO_BE_REPLACED