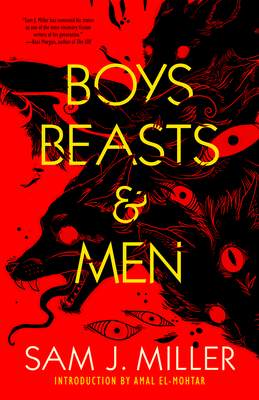 In Nebula Award-winning author Sam J. Miller's devastating debut short-fiction collection, featuring an introduction by Amal El-Mohtar, queer infatuation, inevitable heartbreak, and brutal revenge seamlessly intertwine. Whether innocent, guilty, or not even human, the boys, beasts, and men roaming through Miller's gorgeously crafted worlds can destroy readers, yet leave them wanting more. "Miller's sheer talent shines through in abundance . . . Boys, Beasts & Men is an outrageous journey which skillfully blends genres and will haunt you with its original, poetic voices as much as its victims, villains, and treasure trove of leading actors."
--
Grimdark Magazine Despite his ability to control the ambient digital cloud, a foster teen falls for a clever con-man. Luring bullies to a quarry, a boy takes clearly enumerated revenge through unnatural powers of suggestion. In the aftermath of a shapeshifting alien invasion, a survivor fears that he brought something out of the Arctic to infect the rest of the world. A rebellious group of queer artists create a new identity that transcends even the anonymity of death. Sam J. Miller (Blackfish City, The Art of Starving) shows his savage wit, unrelenting candor, and lush imagery in this essential career retrospective collection, taking his place alongside legends of the short-fiction form such as Carmen Maria Machado, Carson McCullers, and Jeff VanderMeer.

Sam J. Miller is the Nebula-Award-winning author whose debut, The Art of Starving, which was an NPR Best of the Year; his second novel, Blackfish City, was a Best Book of the Year for Vulture, The Washington Post, Barnes & Noble, and more, as well as a "Must Read" in Entertainment Weekly and O: The Oprah Winfrey Magazine. A recipient of the Shirley Jackson Award and a graduate of the Clarion Writers' Workshop, Miller's work has been nominated for the World Fantasy, Theodore Sturgeon, John W. Campbell, and Locus Awards, and reprinted in dozens of anthologies. The last in a long line of butchers, he lives in New York City and at samjmiller.com. Amal El-Mohtar (Introduction) is an award-winning writer of fiction, poetry, and criticism. Her short story "Seasons of Glass and Iron" won the Hugo, Nebula, and Locus Awards and was a finalist for the World Fantasy, Sturgeon, Aurora, and Eugie Awards in the same year. El-Mohtar is the author, with Max Gladstone, of This Is How You Lose the Time War, a queer, epistolary, spy-vs-spy love story, and The Honey Month, a collection of poetry and prose written to the taste of twenty-eight different kinds of honey. She reviews books for NPR and is the science-fiction and fantasy columnist for the New York Times Book Review. El-Mohtar lives in Ottawa with her spouse and two cats.

This feature require that you enable JavaScript in your browser.
END_OF_DOCUMENT_TOKEN_TO_BE_REPLACED

END_OF_DOCUMENT_TOKEN_TO_BE_REPLACED

This feature require that you enable JavaScript in your browser.
END_OF_DOCUMENT_TOKEN_TO_BE_REPLACED