He Stopped Loving Her Today: George Jones, Billy Sherrill, and the Pretty-Much Totally True Story of the Making of the Greatest Country Record of A (American Made Music) (Hardcover) 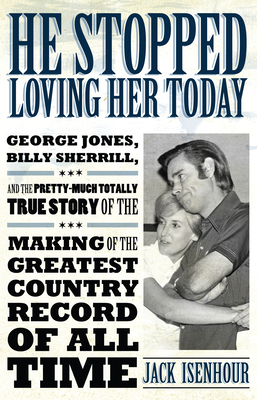 A behind-the-scenes look at the creation of a country music masterpiece When George Jones recorded "He Stopped Loving Her Today" more than thirty years ago, he was a walking disaster. Twin addictions to drugs and alcohol had him drinking Jim Beam by the case and snorting cocaine as long as he was awake. Before it was over, Jones would be bankrupt, homeless, and an unwilling patient at an Alabama mental institution. In the midst of all this chaos, legendary producer Billy Sherrill--the man who discovered Tammy Wynette and cowrote "Stand by Your Man"--would somehow coax the performance of a lifetime out of the mercurial Jones. The result was a country masterpiece. He Stopped Loving Her Today, the story behind the making of the song often voted the best country song ever by both critics and fans, offers an overview of country music's origins and a search for the music's elusive Holy Grail: authenticity. The schizoid bottom line--even though country music is undeniably a branch of the make-believe world of show biz, to fans and scholars alike, authenticity remains the ultimate measure of the music's power. Jack Isenhour, Nashville, Tennessee, is the author of Same Knight, Different Channel: Basketball Legend Bob Knight at West Point and Today and coauthor, with Dennis Rodman, of the basketball star's memoir, I Should Be Dead by Now.

This feature require that you enable JavaScript in your browser.
END_OF_DOCUMENT_TOKEN_TO_BE_REPLACED

END_OF_DOCUMENT_TOKEN_TO_BE_REPLACED

This feature require that you enable JavaScript in your browser.
END_OF_DOCUMENT_TOKEN_TO_BE_REPLACED