Black Freemasonry: From Prince Hall to the Giants of Jazz (Hardcover) 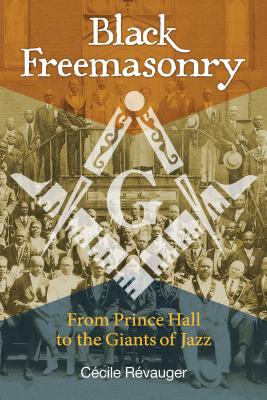 • Examines the letters of Prince Hall, legendary founder of the first black lodge

• Reveals how many of the most influential jazz musicians of the 20th century were also Masons, including Louis Armstrong, Duke Ellington, and Nat King Cole

• Explores the origins of the Civil Rights Movement within black Freemasonry and the roles played by Booker T. Washington and W. E. B. Du Bois

When the first Masonic lodges opened in Paris in the early 18th century their membership included traders, merchants, musketeers, clergymen, and women--both white and black. This was not the case in the United States where black Freemasons were not eligible for membership in existing lodges. For this reason the first official charter for an exclusively black lodge--the Prince Hall Grand Lodge of Massachusetts--was granted by the Grand Lodge of England rather than any American chapter.

Through privileged access to archives kept by Grand Lodges, Masonic libraries, and museums in both the United States and Europe, respected Freemasonry historian Cécile Révauger traces the history of black Freemasonry from Boston and Philadelphia in the late 1700s through the Abolition Movement and the Civil War to the genesis of the Civil Rights Movement in the early 1900s up through the 1960s. She opens with a look at Prince Hall, legendary founder and the chosen namesake when black American lodges changed from “African Lodges” to “Prince Hall Lodges” in the early 1800s. She reveals how the Masonic principles of mutual aid and charity were more heavily emphasized in the black lodges and especially during the reconstruction period following the Civil War. She explores the origins of the Civil Rights Movement within black Freemasonry and the roles played by Booker T. Washington and W. E. B. Du Bois, founder of the NAACP, among others.

Looking at the deep connections between jazz and Freemasonry, the author reveals how many of the most influential jazz musicians of the 20th century were also Masons, including Louis Armstrong, Duke Ellington, Nat King Cole, Eubie Blake, Cab Calloway, and Paul Robeson. Unveiling the deeply social role at the heart of black Freemasonry, Révauger shows how the black lodges were instrumental in helping American blacks transcend the horrors of slavery and prejudice, achieve higher social status, and create their own solid spiritually based social structure, which in some cities arose prior to the establishment of black churches.

Cécile Révauger is a respected historian of Freemasonry and a professor at the University of Bordeaux. The author of several books on Freemasonry in French, she lives in the Bordeaux region of Southern France.

“Eminently qualified to write about black Freemasonry, Cécile Révauger depicts with great accuracy how the split of American Freemasonry along racial lines arose and how it still persists, despite some progress within contemporary society. She also perfectly analyzes why it still remains difficult today to overcome prejudices, which are part of a legacy from the Founding Fathers. Her remarkable impartiality provides a balanced analysis of the present situation. Cécile’s work is an important addition to the world of scholarship as well as part of an effort to continue to build bridges in Freemasonry. I warmly recommend this book to every Mason wishing to better understand what kind of challenges remain today.”
— Alain de Keghel, life member of the Scottish Rite Research Society, Southern Jurisdiction

“In her timely new book, Cécile Révauger offers a fresh examination of race, class, and social interaction in North America and the Caribbean, through the lens of three hundred years of Masonic history. What makes the study most remarkable is the unique perspective Révauger brings to the discussion of race relations in the Americas, giving readers the advantage of her scholarly expertise, as well as her privileged status within Masonry, to help us see into the sanctuary of an organization based on the equality of brothers, but which of necessity exists and works in a world rife with inequalities. The Masonic brethren she describes are men of their time and milieu, adapting in new ways the timeless ancient landmarks of Freemasonry to fit the needs and aspirations of their lodges and communities.”
— Susan Mitchell Sommers, Ph.D., professor of history, Saint Vincent College, and author of Thomas Dun

“Cécile Révauger has done a commendable job documenting the struggles and triumphs of black Freemasonry in the United States. Her book should be required reading for all members of the Craft, regardless of their race or ethnicity. It is my sincere hope that the lessons learned from this scholarly study of the history of the Prince Hall Rite will establish, among all Freemasons, a new standard by which their capacity for brotherhood will be measured.”
— Anthony T. Browder, founder and director of the Institute of Karmic Guidance and author of From the

“Masonic paradoxes embodied in a book! Black Freemasonry is not just about African American citizens joining a traditionally white fraternity. Cécile Révauger shows how this institution can be a place to seek freedom, create identity, or be enlightened but also can intensify divisions or encourage discrimination. A must-read for people interested in Masonic history, but also for anyone who wonders what equality, brotherhood, and inclusiveness mean.”
— María Eugenia Vázquez-Semadeni, Ph.D., assistant adjunct professor of history at UCLA

“Among the fascinating social and cultural insights offered by the history of Freemasonry and fraternal organizations, one of the most remarkable and most compelling stories is that of the role of African Americans in Freemasonry, particularly Prince Hall Freemasonry, established in Boston. In this engaging and accessible study, Professor Cécile Révauger provides an introduction to the history of blacks within Freemasonry, analyzing the racism and other obstacles they confronted. The story told by Professor Révauger is by turns heroic, unsettling, and thought provoking.”
— Andrew Prescott, professor of English language, University of Glasgow

“From the Revolution through abolitionism, the rise of jazz, and the civil rights movement, African American Freemasonry has played an important role in the central events of black history--and the history of America itself. Cécile Révauger’s book will allow more people to learn about this extraordinary fraternal movement.”
— Steven C. Bullock, author of Revolutionary Brotherhood: Freemasonry and the Transformation of the Am

“Comprehensive and judicious in its approach, Black Freemasonry clearly lays out the complexities of Prince Hall Freemasonry’s history and tackles head on the heated debates that it has generated since its founding in the late eighteenth century. This didactic and richly illustrated volume should be read and appreciated by specialists and general readers alike.”
— Jessica Harland-Jacobs, associate professor of history, University of Florida, and author of Builder

“. . . an invaluable guide to Prince Hall Freemasonry--and to an understanding of American race relations since Revolutionary times. While Freemasonry’s Enlightenment values of universal fellowship and tolerance failed to overcome the cultural challenge of American slavery and racism until recent decades, the author makes clear that black Freemasonry was an important part of the American civil rights movement. She discusses Prince Hall’s promulgation of the abolition of slavery soon after his first black lodge was chartered in 1784 and follows the political and cultural trail of both black and white Freemasonry ever since. Cécile Révauger sheds new light on the embrace of black Freemasonry by so many of the greatest jazz musicians of the twentieth century and includes valuable historical documentation from the annals of Prince Hall Freemasonry in the well-crafted appendices.”
— James Wasserman, author of The Secrets of Masonic Washington and The Temple of Solomon

“Back in the early 18th century, when the first Masonic lodges opened their doors in Paris, membership was extended to men and women, both white and black, but not so here in the United States. In America, there arose an African American Freemasonry separate from that dominated by whites. The author is a respected historian of Freemasonry and a professor at France’s University of Bordeaux. The author reveals how the origins of the Civil Rights Movement arose from within black Freemasonry and how most of the influential jazz musicians of the 20th century, like Louis Armstrong, Nat King Cole, W.C. Handy, and Cab Calloway, were black Masons.”
— AP Magazine, Brent Raynes, February 2016

This feature require that you enable JavaScript in your browser.
END_OF_DOCUMENT_TOKEN_TO_BE_REPLACED

END_OF_DOCUMENT_TOKEN_TO_BE_REPLACED

This feature require that you enable JavaScript in your browser.
END_OF_DOCUMENT_TOKEN_TO_BE_REPLACED