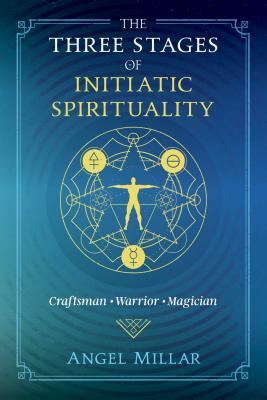 A detailed guide to the three successive initiatic archetypes: Craftsman, Warrior, and Magician

• Investigates the symbolism, rituals, and metaphysical aspects of each initiatic archetype, from the alchemy and shamanism of the craftsman, to the subtle energy work of the warrior, to the sex magic practices and Higher Self work of the magician

• Shares meditations, practices, and transformational techniques for each archetype

• Investigates the similarities between contemporary Western occultism, from Crowley to Chaos Magic, and the “positive thinking” mind metaphysics movement

Exploring the craftsman, warrior, and magician archetypes--three vocations that echo the traditional tripartite division of society--Angel Millar reveals how these archetypes represent the three successive stages of spiritual growth in an individual’s life. He shows how they provide structure for the initiatory process to develop one’s mental, physical, and spiritual potential. As craftsman, the individual experiences “mnemonic” initiation: the cultivation of memory as well as language. As warrior, “somatic” initiation: development of the physical body and cultivation of the spirit body. And as magician, “gnostic” initiation: cultivation of the self and manifestation of the Higher Self.

Investigating the metaphysical aspects of each archetype, the author explores their symbolism, spiritual practices, and rituals. Examining the craftsman archetype, he looks at metallurgy, alchemy, and the “Craft” of Freemasonry, as well as the ancient role of blacksmith as shaman. He explores the idea of God as a “Creator” or “Craftsman,” especially in relation to ancient Greek philosophy, Islamic neoplatonism, and the Kabbalah. Examining the warrior archetype, he reveals how the way of the warrior was affected by religion and mysticism, such as how the Persian martial art of Zoorkhaneh was profoundly shaped by Sufism and why the Buddhist Shaolin temple became synonymous with Kung Fu. The author places special emphasis on the cultivation of subtle energy as practiced in martial arts, especially in relation to Taoist inner alchemy. Examining the magician archetype, he reveals how each individual has two “selves”--a lower self and a Higher Self--and explores the union of opposites studied by the magician, such as in the tantric arts and sacred sex magic. Sharing meditations, practices, and processes associated with each archetype, as well as techniques for transforming one’s consciousness, he also investigates similarities between contemporary Western occultism, from Crowley to Chaos Magic, and the “positive thinking” mind metaphysics movement.

Structured to parallel the three archetypal stages of the initiatic process, this comprehensive guide offers a literary initiation through three degrees of esoteric knowledge.

Angel Millar is a well-known lecturer on Freemasonry, initiation, and esotericism as well as an artist and student of the martial arts. The author of several books, including Freemasonry: Foundation of the Western Esoteric Tradition, he lives in New York City.

“Angel Millar is among a golden handful of writers who authentically and practically bridge the gap between primeval wisdom and modern spirituality. Within the triad of ancient and mythical archetypes of The Three Stages of Initiatic Spirituality, you will discover your true self. Angel’s book will make you stronger, sturdier, and more learned.”
— Mitch Horowitz, PEN Award–winning historian and author of Occult America and The Miracle Club

“This book is the result of stunningly broad in-depth research both on the theoretical and on the practical level--a researcher-practitioner at his very best. While Angel Millar has quite obviously done his homework in terms of sifting through the vast bibliography of anthropology, comparative religious studies, and magic, he also adopts a deeply informed and eminently experiential approach--because, as the famous quote goes, ‘tradition is not to adore the ashes, but to pass on the fire.’ This makes the entire treasure trove of academic and phenomenological wisdom come palpably alive on an unprecedented scale, guiding the reader through the respective iterations of the craftsman, the warrior, and the magician archetype in a both comprehensible and reproducible manner. Highly recommended!”
— Frater U?D?, author of Secrets of Western Sex Magic: Magical Energy and Gnostic Trance

“Angel Millar provides the reader with an extremely valuable exploration of initiation and transformation. His astute scholarship ranges across many cultures and ages to identify how human beings have repeatedly found self-renewal and self-transcendence in three fundamental and universal aspects of life--the craftsman, warrior, and magician archetypes. He weaves together ancient traditional threads with the contemporary language and practices of psycho-spiritual alchemy and depth psychology, thus revealing a tapestry of timeless vision with immediate relevance and applicability. Anyone concerned with a comprehensive context in which to contemplate and facilitate their own initiatic and transformative journey will find this book worthy of repeated consultation.”
— C. R. Dunning Jr., author of Contemplative Masonry

“Diving deep into the wisdom of the ancients, Angel Millar offers a refreshing answer to the existential crisis experienced by modern man. The Three Stages of Initiatic Spirituality presents holistic connections with divinity, achievable by the integration of body, mind, and soul through the three timeless archetypes of craftsman, warrior, and magician.”
— Angelo Nasios, author of Tarot: Unlocking the Arcana and Tarot Tracker: A Year-Long Journey

“The Three Stages of Initiatic Spirituality is a comprehensive tour of the essentials of initiation and their importance in daily life. Taking the reader through the three traditional and crucial stages and exploring multiple spiritual traditions, Millar provides the reader with the background, purpose, and methods whereby these archetypal stages can be activated in the life of the individual. This is a book with an important message and will be valuable to anyone regardless of their particular path.”
— Mark Stavish, author of Egregores: The Occult Entities That Watch Over Human Destiny

"Angel Millar reminds us that initiation is involved with memory–we need not so much to learn new things as to remember old ones, buried deep within us. We explore with him the adjuncts of Kabbalah and the relevance of Neoplatonism, of death and rebirth and of our enlightened Self. An absorbing read, well worth it and one of the most important works to be published in recent times."
— The Freemason (British Federation)

This feature require that you enable JavaScript in your browser.
END_OF_DOCUMENT_TOKEN_TO_BE_REPLACED

END_OF_DOCUMENT_TOKEN_TO_BE_REPLACED

This feature require that you enable JavaScript in your browser.
END_OF_DOCUMENT_TOKEN_TO_BE_REPLACED