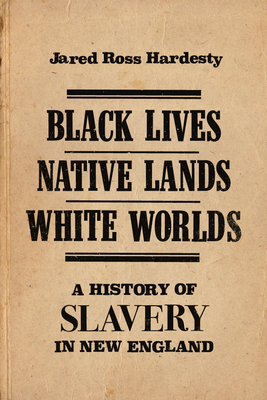 By Jared Ross Hardesty
$90.00
Email or call for price.

Shortly after the first Europeans arrived in seventeenth-century New England, they began to import Africans and capture the area's indigenous peoples as slaves. By the eve of the American Revolution, enslaved people comprised only about 4 percent of the population, but slavery had become instrumental to the region's economy and had shaped its cultural traditions. This story of slavery in New England has been little told.

In this concise yet comprehensive history, Jared Ross Hardesty focuses on the individual stories of enslaved people, bringing their experiences to life. He also explores larger issues such as the importance of slavery to the colonization of the region and to agriculture and industry, New England's deep connections to Caribbean plantation societies, and the significance of emancipation movements in the era of the American Revolution. Thoroughly researched and engagingly written, Black Lives, Native Lands, White Worlds is a must-read for anyone interested in the history of New England.

JARED ROSS HARDESTY is associate professor of history at Western Washington University and author of Unfreedom: Slavery and Dependence in Eighteenth-Century Boston.

"Arresting and enlightening . . .[t]he book looks at the origins of slavery in the region, the kinds of labor enslaved people did, as well as their private lives and their modes of resisting slavery."—Boston Globe

"A lively and compelling account of the largely unknown history of slavery in New England and its lasting impacts on the region."—Emerson W. Baker, author of The Devil of Great Island: Witchcraft and Conflict in Early New England

"In this well-researched, highly readable book, Hardesty makes the enormously difficult topic of slavery in New England understandable."—Harvey Amani Whitfield, author of North to Bondage: Loyalist Slavery in the Maritimes

"Hardesty delivers a highly readable, comprehensive history of slavery in New England that will appeal to lay historians and early-career academic historians alike."—CHOICE

"[A] meticulously researched history that turns on its head the notion that New England was beyond reproach with respect to slavery."—Portland Press Herald

"Hardesty's work offers the chance for readers to peer into a region still grappling with acknowledging its history. Hardesty's work is as much a synthesis as it is a call for the correction of public memory, something future works would do well to heed."—Black Perspectives

"One of the most important interventions and strengths of Black Lives, Native Land, White Worlds is how the monograph centers not only the lives of enslaved people as opposed to centering their enslavers. Hardesty describes the lives of Black New Englanders in vivid detail with accessible prose."—Labour/Le Travail

"Black Lives is a welcome addition to the current resurgent interest in the subject of slavery in the North."—The New England Quarterly

This feature require that you enable JavaScript in your browser.
END_OF_DOCUMENT_TOKEN_TO_BE_REPLACED

END_OF_DOCUMENT_TOKEN_TO_BE_REPLACED

This feature require that you enable JavaScript in your browser.
END_OF_DOCUMENT_TOKEN_TO_BE_REPLACED