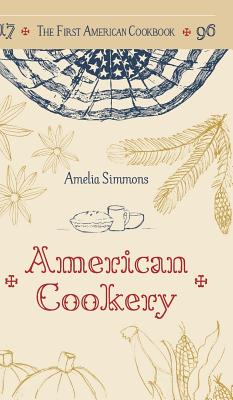 This high-quality re-issue of the first American cookbook is an exact facsimile of the landmark 1796 publication that brought about the birth of American cuisine. In its pages of ingredients and preparations it reveals a great deal about the variety of food enjoyed by Colonial Americans, their tastes and cooking techniques, and the numerous resourceful experiments American women were conducting with New World ingredients that hadn't been cataloged in the primarily British cookbooks of the day.

Author Amelia Simmons worked as a domestic in Colonial America and she gleaned much of the wisdom compiled in this book first-hand while working in the kitchen. Her book, like other early cookbooks, includes advice for selecting the best cuts of meat and fish and the most tender, flavorful veggies. Simmons' real innovation, however, is her inclusion of uniquely American ingredients that were omitted from imported British cookbooks at the time, as well as workarounds for traditional recipes that called for ingredients unavailable in Colonial America. Here are the first published recipes making use of ingredients like corn, cornmeal, spruce, pumpkins, cranberries, and Jerusalem artichokes. The words "cookie" and "slaw" also make their first appearances in this book

A cookbook of many firsts, Simmons' American Cookery will make a great addition to libraries of cookbook collectors, cultural historians, Americana buffs, and gourmets. Read on and take a trip through the culinary culture of a bygone era.

This feature require that you enable JavaScript in your browser.
END_OF_DOCUMENT_TOKEN_TO_BE_REPLACED

END_OF_DOCUMENT_TOKEN_TO_BE_REPLACED

This feature require that you enable JavaScript in your browser.
END_OF_DOCUMENT_TOKEN_TO_BE_REPLACED