Good Hunting: In Pursuit of Big Game in the West (Paperback) 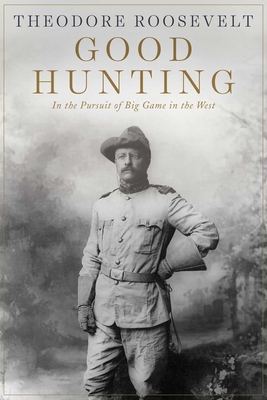 Written in the late nineteenth century and first published in Harper’s Round Table magazine in 1896, this collection of articles details turn-of-the-century America’s rugged wilderness. Good Hunting is an engaging read for those whose interests lie in hunting sports, and nature. Roosevelt, being the first president to begin many of the national park conservation programs in twentieth-century America, was a lover of the outdoors, and his writings are filled with notations and observations of the lands that he explored. From hunting elks, wolves, and bucks, Roosevelt provides stunning insight into some of northwestern America’s most well-known inhabitants.

Good Hunting is a fascinating historical portal through which we can view a celebrated sportsman, president, and keen observer of the outdoors. The seven chapters in this book range from classic hunting articles, memorable anecdotes from other outdoorsmen, and even a detailed piece on the specifics of ranching—a topic of much interest at the turn of the century.

This is a classic read for anyone wanting to learn more about a man who was so loved by a country, and to escape to the America of yesteryear.

Skyhorse Publishing is proud to publish a broad range of books for hunters and firearms enthusiasts. We publish books about shotguns, rifles, handguns, target shooting, gun collecting, self-defense, archery, ammunition, knives, gunsmithing, gun repair, and wilderness survival. We publish books on deer hunting, big game hunting, small game hunting, wing shooting, turkey hunting, deer stands, duck blinds, bowhunting, wing shooting, hunting dogs, and more. While not every title we publish becomes a New York Times bestseller or a national bestseller, we are committed to publishing books on subjects that are sometimes overlooked by other publishers and to authors whose work might not otherwise find a home.

Theodore Roosevelt was the twenty-sixth president of the United States of America. One of America’s most popular presidents, Roosevelt was an avid outdoorsman and historian, and a vivacious reader; he contributed hundreds of books to the literary world, writing of his adventures in Africa and South America. Roosevelt passed away in 1919 at the age of sixty.

This feature require that you enable JavaScript in your browser.
END_OF_DOCUMENT_TOKEN_TO_BE_REPLACED

END_OF_DOCUMENT_TOKEN_TO_BE_REPLACED

This feature require that you enable JavaScript in your browser.
END_OF_DOCUMENT_TOKEN_TO_BE_REPLACED