Uncharted: A Couple's Epic Empty-Nest Adventure Sailing from One Life to Another (Hardcover) 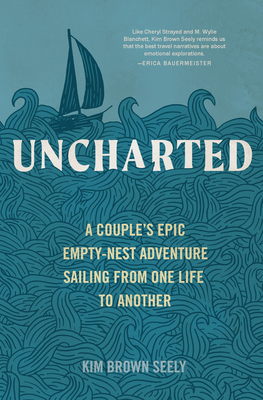 A couple facing the dreaded empty nest realize they need to rediscover who they are. This is an adventure story about a voyage from one life chapter to another that involves a too-big sailboat, a narrow and unknown sea, and an appetite to witness a mythical blonde bear that inhabits a remote rainforest.

Kim Brown Seely and her husband had been damn good parents for more than 20 years. That was coming to an end as their youngest son was about to move across the country. The economy was in freefall and their jobs stagnant, so they impulsively decided to buy a big broken sailboat, learn how to sail it, and head up through the Salish Sea and the Inside Passage to an expanse of untamed wilderness in search of the elusive blonde Kermode bear that only lives in a secluded Northwest forest. Theirs was a voyage of discovery into who they were as individuals and as a couple at an axial moment in their lives. Wise and lyrical, this heartfelt memoir unfolds amid the stunningly wild archipelago on the far edge of the continent.

Kim Brown Seely, the 2016 Lowell Thomas Journalist of the Year, has worked in publishing on both coasts, including as senior editor at Travel & Leisure, contributing editor at National Geographic Adventure, and travel editor at Microsoft and Amazon. Her writing has also appeared in Outside, National Geographic Traveler, Sunset, Coastal Living, and Virtuoso Life, where she has been a contributing writer for nearly 20 years.

“Refreshingly relatable...Uncharted [is a] firm reminder that despite the independent allure of solo travel, sometimes we can’t change on our own.”
—Outside

“Ms. Seely captures the action and nature encountered on the couple’s journey in lyrical prose and descriptions. As they navigate their way through fiords and rough waters and feel the sting of cold air, they also find a new way to envision their future together.”
—Wall Street Journal, “The Best Books About Retirement and Aging of 2019”

“Like Cheryl Strayed and M. Wylie Blanchett, Kim Brown Seely reminds us that the best travel narratives are about emotional explorations even more than physical ones. Uncharted has all the adventure you might expect when an inexperienced couple takes a too large sailboat too far north, on a quest to escape an empty nest and find a white Spirit bear. But what makes this book exceptional is the way its journey slows you down and expands your soul.”
—Erica Bauermeister, bestselling author of The School of Essential Ingredients

“Just because I’ll never follow in Seely's footsteps doesn’t mean that reading the account of her journey wasn’t wonderfully exciting from the safety of my sofa.”
—Margot Kahn, Bust

“There are close calls, lost anchors and lost tempers, yet what Seely finds along the way makes Uncharted one of the most compelling books of nature writing that I’ve read in a while (and this after a steady recent diet of Richard Powers, Robert Macfarlane and Barry Lopez).”
—Post and Courier

“Uncharted is a marvelous journey of beauty and wonder, love and loss, loons and eagles, hemlocks and giant kelp, sea wolves, humpback whales, and bears. Kim Brown Seely celebrates it all: gale warnings, napkin-drawn maps, the luxury of slowness, the exuberance of disco dancing at the dish sink, and the hard-won grace of letting go and stepping out into the rain.”
—Ana Maria Spagna, author of Uplake

“Uncharted is the Moby Dick of empty-nest tales. Kim Brown Seely, her sons suddenly grown-up and gone, journeys on a sailboat through risky Northwest waters, meditating on the pains and blessings of marriage, parenthood, and escape to the wilds. She writes so exquisitely well—you can hear the humpback whales breathe.”
—Blaine Harden, author of Escape from Camp 14

“Kim Seely’s page-turning meditation on marriage, family, letting go, and the pull of the unknown is equal parts inspiration and confessional, with the untamed Pacific Northwest coast as a backdrop. A deftly written Wild for the empty-nest set—and for anyone who’s ever arrived at a crossroads in life—it lays bare a reckoning with midlife in all its messy, tearful, triumphant revelation.”
—Marika Cain, Virtuoso Life

“Uncharted takes us on a voyage of adventure that is at its heart, a meditation on the changing nature of love.”
—Leslie T. Sharpe, author of The Quarry Fox