To the Ends of the Earth: The Truth Behind the Glory of Polar Exploration (Hardcover) 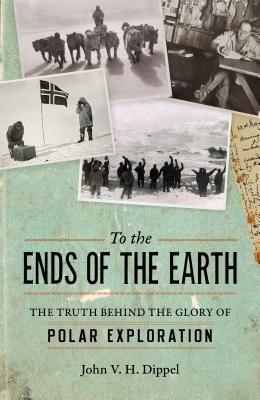 This fascinating social history of polar expeditions examines the cultural trends that produced these daring, even reckless journeys.

From the late-17th to the early 20th century, intrepid explorers from America and Europe risked (and sometimes lost) their lives exploring the forbidding, uncharted landscapes of the Arctic and Antarctica. What drove these men to undertake these seemingly impossible journeys? In this deeply researched book, author John Dippel makes a convincing case that dozens of polar expeditions were motivated less by courageous idealism than personal ambition and national rivalries.

The author traces the ways in which men of unbridled ambition responded to society's need for heroes by masking their true intentions behind patriotic sentiments or noble claims about advancing science. In so doing they frequently put their own lives and those of the men in their command at enormous risk. At the same time, they projected an attitude of cultural superiority, looking down on indigenous arctic people. Their disrespect and ignorance of native means of transportation, diet, shelter, and knowledge of the terrain often led explorers into disaster, where men perished from starvation and exposure or nearly lost their minds. In the end, the failure of so many polar expeditions exposed the limits of humanity's control of nature and helped to undermine faith in inevitable progress.

Readers who have heard of the incredible exploits of such famous explorers as Robert F. Scott, Roald Amundsen, James Cook, and Robert Peary will find in this book an intriguing explanation for what impelled these men to endure unimaginable cold, near-starvation, and years of isolation at the ends of the earth.

John V. H. Dippel, an independent historian, is the author of Eighteen Hundred and Froze to Death: The Impact of America's First Climate Crisis; War and Sex: A Brief History of Men's Urge for Battle; Ordinary Radicals: Portraits of Lives Changed by the Sixties; Race to the Frontier: "White Flight" and Western Expansion; Bound Upon a Wheel of Fire: Why So Many German Jews Made the Tragic Decision to Remain in Nazi Germany; and Two Against Hitler: Stealing the Nazis' Best-Kept Secrets. His articles on politics and social affairs have appeared in the Atlantic Monthly, New Republic, Christian Science Monitor, and other publications.

"Dippel is an engaging, provocative storyteller whose eye for the unexpected detail is a delight"


“A lively, richly detailed investigation of the promises and perils of historic polar expeditions. In our moment of climate crisis, this book helps readers understand why generations of explorers viewed their relationship to the nonhuman world as antagonistic—and at what cost. Full of personality and compelling details, John Dippel’s polar history is sure to find wide readership.”

—Hester Blum, associate professor of English, Penn State University, author of The News at the Ends of the Earth: the Ecomedia of Polar Exploration


“A sharp, brightly written history. At a time when polar exploration was the great drama of the Victorian Age, Dippel takes us deep backstage. Here we see explorers—all too human—without the mantle of their furs and flags to protect them. In Dippel’s account, the real story of exploration begins to take shape.”

—Michael F. Robinson, professor of history at the University of Hartford, author of The Coldest Crucible: Arctic Exploration and American Culture


“Dippel has read widely and thought deeply on polar exploration and the pantheon of daring leaders who comprise the principal heroes of this mythology. He has countless interesting observations on psychology, temperament, and historical and social context that question orthodoxy and open new thoughts. To the Ends of the Earth should be considered required reading for any serious study of these larger-than-life but all-too-human historical figures.”

—Stephen R. Bown, author of Island of the Blue Foxes: Disaster and Triumph on the World’s Greatest Scientific Expedition and The Last Viking: The Life of Roald Amundsen


“This book is a good read both for those with knowledge of the polar regions as well as for beginners on that topic. It is well researched and written, and the author reveals detailed new insights into historic polar events and explorers, illuminating the humanity of the men who took part in these expeditions. The reader will come away with a better understanding of society in the past and how its attitudes shaped the ambition and course of polar expeditions.”

This feature require that you enable JavaScript in your browser.
END_OF_DOCUMENT_TOKEN_TO_BE_REPLACED

END_OF_DOCUMENT_TOKEN_TO_BE_REPLACED

This feature require that you enable JavaScript in your browser.
END_OF_DOCUMENT_TOKEN_TO_BE_REPLACED