The Wars of the Green Berets: Amazing Stories from Vietnam to the Present (Paperback) 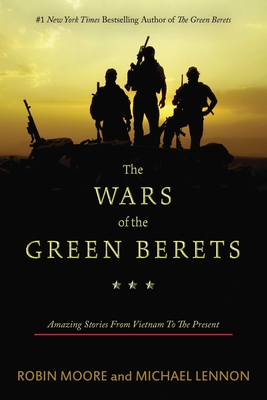 Legendary adventurer and raconteur Robin Moore has teamed up with third-generation Army officer Michael “Doc” Lennon to share the stories of the soldiers who have earned the right to wear the Green Beret.

From Vietnam to the present day, The Wars of the Green Berets retells the stranger-than-fiction, hair-raising experiences of the stout men who have risked it all, from their firefights on the Cambodian border to their present-day patrols on the dangerous streets of Baghdad. It takes us to the streets of Mogadishu in the days before and after the events of Black Hawk Down. It puts us on the rocky moonscapes of Afghanistan in search of the enemy, where soldiers face the dangers of friendly fire as well as fierce Taliban fighters.

Featuring a new foreword by a former Green Beret about the continued efforts and role Special Forces play in modern warfare, this is a work of fiction that is more real than many works of history. It’s destined to become a classic.

Robin Moore is the bestselling author of The French Connection and The Hunt for Bin Laden, as well as more than thirty other novels and nonfiction books. He is the only civilian ever to go through the Special Forces Qualification (“Q”) course.

Lieutenant Commander Michael B. “Doc” Lennon has served on active and reserve duty since 1982.

Scott Neil retired in 2010 as the senior enlisted adviser to the director of US Special Operation Command’s Interagency Task Force (IATF) after serving for twenty-five years, with seventeen years in the Army Special Forces, better known as the Green Berets. Scott has conducted numerous successful special operation combat missions, including hostage rescue, direct action, and unconventional warfare, and was one of the first to lead the charge into Afghanistan, Iraq, and the Horn of Africa. His access and intimate associations with all levels of counter terrorism, unconventional warfare, and special operations science and technologies have provided him with tremendous insights into the policies, actions, and activities that drove successful outcomes during the war. Today, Scott serves as the director of strategic development for the Green Beret Foundation.

This feature require that you enable JavaScript in your browser.
END_OF_DOCUMENT_TOKEN_TO_BE_REPLACED

END_OF_DOCUMENT_TOKEN_TO_BE_REPLACED

This feature require that you enable JavaScript in your browser.
END_OF_DOCUMENT_TOKEN_TO_BE_REPLACED