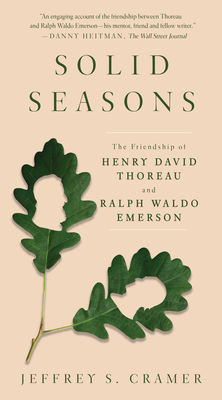 A thoughtfully researched, movingly presented dual-biography of two iconic American writers, each trying to find the ideal friend with whom they could share their journey through our imperfect world.

Any biography that concentrates on either Henry David Thoreau or Ralph Waldo Emerson tends to diminish the other figure, but in Solid Seasons both men remain central and equal. Through several decades of writing, friendship remained a primary theme for them both.

Collecting extracts from the letters and journals of both men, as well as words written about them by their contemporaries, Jeffrey S. Cramer beautifully illustrates the full nature of their twenty-five-year dialogue. Biographers like to point at the crisis in their friendship, focusing particularly on Thoreau's disappointment in Emerson--rarely on Emerson's own disappointment in Thoreau--and leaving it there, a friendship ruptured. But the solid seasons remained, as is evident when, in 1878, Anne Burrows Gilchrist, the English writer and friend of Whitman, visited Emerson. She wrote that his memory was failing "as to recent names and topics but as is usual in such cases all the mental impressions that were made when he was in full vigour remain clear and strong." As they chatted, Emerson called to his wife, Lidian, in the next room, "What was the name of my best friend?"

JEFFREY S. CRAMER is the editor of Walden: A Fully Annotated Edition, winner of a 2004 National Outdoor Book Award, and The Quotable Thoreau, recipient of an Umhoefer Prize for Achievement in Humanities. In 2017, Cramer was the historical consultant for the Ken Burns-produced documentary Walden, created for the Walden Pond State Reservation during the Thoreau Bicentennial. Cramer is the curator of collections at Walden Woods Project's Thoreau Institute Library. He lives in Maynard, Massachusetts.

This feature require that you enable JavaScript in your browser.
END_OF_DOCUMENT_TOKEN_TO_BE_REPLACED

END_OF_DOCUMENT_TOKEN_TO_BE_REPLACED

This feature require that you enable JavaScript in your browser.
END_OF_DOCUMENT_TOKEN_TO_BE_REPLACED