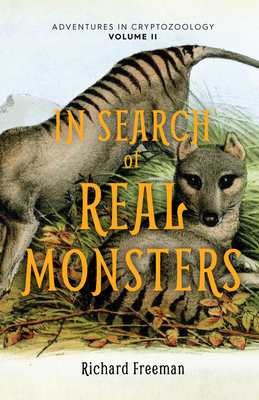 Join a Fascinating Adventure on the Hunt for Mythical Animals

From animals long believed extinct, to monsters that we thought never existed--this book acts as both a guide to, and unbelievably true account of legendary cryptids.

Globetrotting adventure for mythical animals. Cryptozoologist Richard Freeman has spent years researching and tracking down mythical monsters. In this book, he recounts riveting monster hunt stories; through the dense forests of Sumatra on the trail of a mystery ape known as the orang-pendek, to Tasmania in search of the thylacine or Tasmanian wolf. Every corner of Earth has its own monster--even in the traceless Gobi Desert as he searches for the Mongolian death worm, a creature so feared by the nomads that it can send a whole community into a panic.

Expert advice to start your own hunt. The author provides you with excellent advice on how to carry out your own cryptozoological expeditions from scratch. This includes advice on what equipment to take, inoculations, how to choose which mythical animals to hunt, planning ahead and the importance of getting good local guides to name a few.

This feature require that you enable JavaScript in your browser.
END_OF_DOCUMENT_TOKEN_TO_BE_REPLACED

END_OF_DOCUMENT_TOKEN_TO_BE_REPLACED

This feature require that you enable JavaScript in your browser.
END_OF_DOCUMENT_TOKEN_TO_BE_REPLACED